The New York Philharmonic is still rolling out the features of its new home, the freshly gut-renovated David Geffen Hall.

For its performances this week, the orchestra is deploying a 50-foot-wide media wall in its lobby, with the promise of regularly simulcasting concertsfree to the public.

That’s a technological coup, to be sure, but the bigger news this week ought to be the conductor Hannu Lintu’s Philharmonic debut. A Finn with a global audience, thanks to a discography stacked with recorded premieres of exciting works by composers including Kaija Saariaho and Magnus Lindberg, he steered the orchestra on Wednesday through the most revealing and entertaining concert I’ve heard the ensemble deliver this season. 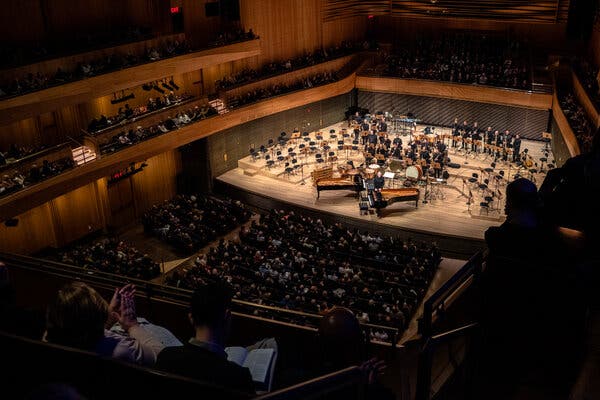 The Philharmonic’s concerts this week, which include Bartok’s Concerto for Two Pianos and Percussion, could be seen from either the auditorium or the lobby of Geffen Hall.Credit…Hilary Swift for The New York Times

It helps that the program, which runs through Saturday, is compelling and unusual. Stravinsky’s tangy Symphonies of Wind Instruments pairs well with the playful strangeness of Bartok’s rarely heard Concerto for Two Pianos and Percussion, which featured the star pianist Daniil Trifonov and his former teacher Sergei Babayan. The all-Finnish second half — of Saariaho’s “Ciel d’Hiver” and Sibelius’s Symphony No. 7 — sits squarely in Lintu’s wheelhouse.

This is the kind of both broadly accessible and aesthetically rich program that we need to see more often. The same goes for Lintu’s presence at the podium. It’s fortunate that this is the week in which the Philharmonic debuts its bank of high-definition monitors — known as the Hauser Digital Wall — in the lobby.

When the wall is activated, anyone can walk into the Geffen lobby and claim a spot in front of it — no reservation or payment required. You can sit on the floor, or on a nearby couch, chair or stool, and take in the show. (That’s what I did on Thursday night, after seeing the concert in the auditorium on Wednesday.)

The speaker sound in the lobby is nowhere near equal to the acoustic experience in the hall. In front of the wall, there was also ambient noise, like the jangling key chains of roving police patrolling the area, sometimes with canine partners. (Sit close to the screen to cut down on that.)

Think of the lobby simulcast as an Amtrak quiet car: You know you’re never going to get total silence. But after a harried shift at work, dropping by could offer a glancing, much-appreciated bit of culture, with no planning or expense necessary. (On Thursday, the lobby’s concession stand was also open, at least during the first half of the show.)

The hope is that the lobby’s offerings will tempt those who are classical-curious into investing in tickets for the auditorium experience.

And Lintu’s appearance is well worth the price.

His experience with steely yet lush Finnish contemporary music has prepared him to lead the Philharmonic while it is still in the process of refining its approach to this hall’s clear, if slightly clinical, sound. On Wednesday, the adjustment seemed to remain a work in progress — some overly acidic collisions of treble tones appeared in the Stravinsky, for example — but there was also much that proved electrifying under Lintu’s baton.

The first movement of the Bartok concerto — which has its roots in a chamber version for pianists and percussionists — builds from a murmuring, mystic opening to riotous ensemble play. But Lintu ensured that the dramatic transitions did not come across as jagged.

The lobby simulcasts, while a nice taste of culture at the end of the day, don’t compare with the acoustics of the auditorium.Credit…Hilary Swift for The New York Times

In the first movement, subtle, rolling bass frequencies in the percussion bloomed and seemed to organically inspire intense pianistic volleys between Trifonov and Babayan. And the concerto’s string parts — which come across as extraneous in some readings — sounded fully integrated here, whether in moments of plucked frenzy in the second movement or in swooning melodic accompaniment, in the third. If Babayan’s recourse to romantic rubato occasionally threatened to tarry behind Lintu’s beat, Trifonov was there to keep things on course.

After intermission (and a two-piano Mozart encore from Trifonov and Babayan), Lintu stirred the principal clarinetist, Anthony McGill, into some gently pressurized yet still warmly voiced figures in “Ciel d’Hiver.” And Sibelius’s final symphony — officially a single, transporting 20-minute movement — unfurled with a majesty that required no special pleading (or the orchestral blaring of recent Philharmonic performances).

Before the Thursday concert’s second half, McGill dropped by the lobby and appreciated some of the Bartok concerto, before suiting up to get onstage. We exchanged some positive impressions about the multimedia presentation. But I also took the opportunity to share my opinion that Lintu might be the week’s real highlight.

McGill praised the conductor, and when I said that I hoped Lintu would return, he added, “I hope so, too.” For now, this week is your chance to hear him lead the Philharmonic, from in the hall or in the lobby: You choose.

Tags
That This Week Which With

The Charming Star With Soulful Eyes Happens to Be a Donkey

Novak Djokovic Finds Harmony and a Lot of Wins