Cafe Spaghetti is a new restaurant in Brooklyn whose name tells you exactly what it’s all about — a neighborhood standby where you can take kids and grandparents, get sauce on your shirt and wave to flag down a waiter without anyone thinking you’re rude.

“It’s the anti-Carbone,” a friend who ate there said. Both restaurants are tributes by young Italian chefs to the old red-sauce joints where they ate as children. Rich Torrisi and Mario Carbone modeled Carbone on Italian restaurants with waiters in bow ties, a reserve wine list and the best tables set aside for local big shots who never look at a menu or order anything on it. Whether you like Carbone depends entirely on whether you walk out feeling like one of the big shots.

For Sal Lamboglia, the owner and chef of Cafe Spaghetti, the ideal seems to have been a small, family-run restaurant — husband in the kitchen, wife at the door (or vice versa), Louise’s kid from down the block waiting tables. Cafe Spaghetti has almost none of the “Goodfellas” theatricality of Carbone. It also costs half as much, maybe less. The wine list is decent enough but nobody thinks less of you if you save a few bucks by drinking the house red with your sausage and peppers. And as far as I can tell, there is no best table. 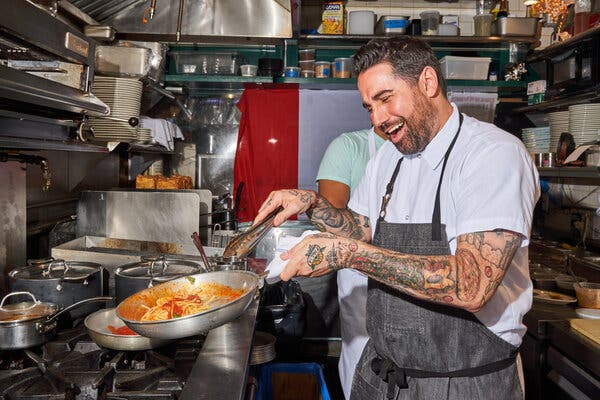 Sal Lamboglia is the owner and chef.Credit…Adam Friedlander for The New York Times

In fact, most people who’ve been there since it opened in May have eaten at wobbly patio tables outdoors. The interior seems to consist of a handful of seats in the front, another cluster in the back and a fast-moving kitchen in between. At least, that’s what I thought I saw on my way to the garden, where a blue Vespa is parked between rows of tables shaded by striped beach umbrellas, as if Cafe Spaghetti were on the lido in Taormina and not half a block from the Brooklyn-Queens Expressway, in that orphaned area sometimes known as the Columbia Street waterfront district.

Under one of those umbrellas during this summer’s relentless heat, it was hard to say no to a Spaghetti Spritz, a fizzy, bright scarlet drink served on the rocks with speared green olives — the bar’s take on the Venetian Spritz. Any of the dozen or so vermouths, though, would also suit the cocktail food that constitutes most of Mr. Lamboglia’s antipasto menu. (Salads, very nice ones, make up the rest).

For seven years before he went out on his own to open Cafe Spaghetti, Mr. Lamboglia was the chef at Bar Primi in Manhattan. Along with a number of other restaurants that came after Carbone, Bar Primi mined Southern Italian cooking in the form it had entered the American canon, re-Italianizing it from time to time, buying better ingredients when it mattered and borrowing a trick or two from modern kitchen practice, all to help make the case that those old dishes had been respectable all along.

To find out how that tastes, get an order of Cafe Spaghetti’s rice balls. They’ve been made over in the style of cacio e pepe, the pasta dish whose key ingredient pair, black pepper and Pecorino Romano, recently jumped the species barrier and takes all kinds of non-pasta forms. The combination makes the rice balls assertive, almost pungent, while some kind of kitchen wizardly makes them wildly tender, held together beneath a fine layer of golden bread crumbs as if by mere habit.

But at the start of a meal at Cafe Spaghetti there is also calamari to consider, fried with sweet and spicy peppers they way they do it in Rhode Island. Spiedini alla Romana appear, too. This is essentially mozzarella cheese fried between slices of bread and then buried under a sauce that can vary from one kitchen to the next. Mr. Lamboglia makes his from tomatoes with anchovies and enough lemon juice to make you pay attention. It looks like a sandwich that fell into somebody’s soup.

All good spiedini get better as they get soggier.Credit…Adam Friedlander for The New York Times

Like all good spiedini, Cafe Spaghetti’s get better as they get soggier and are at their peak when they have turned almost completely into mush. This is one reason you almost never see spiedini in a New York restaurant that hasn’t been around for at least 50 or 60 years.

Is anyone surprised that the two best pastas at Cafe Spaghetti involve spaghetti? Spaghetti and meatballs is not one of them; Mr. Lamboglia breaks from American custom by serving his spicy, no-nonsense meatballs on their own, as an appetizer.

Mr. Lamboglia makes classic pasta with self-assurance and seeming artlessness. The sauce for thick corkscrews of fusilli grosso is a Genoese ragù that is heavily perfumed with onions and so lightly flavored with tomatoes that it is just barely pink.

Pasta built around a seasonal ingredient are less dependable. Back in June, pasta e piselli — short tubes with sweet green peas in an invisibly delicious sauce of onions and guanciale — was deeply convincing; the fava beans strewn around a plate of cheese ravioli were not.

Bar Primi used to let you know that pasta was the point by serving just one main course a night. At Cafe Spaghetti, there will be three or four. Seeing chicken francese again was a kick, and the bracing taste of lemon-butter sauce killed any suspicion that this was a winking, ironic joke. And it’s impressive how much mileage the eggplant Parm gets out of putting the cheese in the foreground, something I would not have thought was a good idea.

Servers push the tiramisù pretty hard, pointing out that Mr. Lamboglia’s father, Tony, comes to the restaurant every day to make it, the same way he did for the last few years at Bar Primi. There is no point resisting and no reason to, either. Where other tiramisùs can be sodden and ridiculously sweet, this is a light and delicate creation.

As long as Tony and his tiramisù are in the picture, Cafe Spaghetti’s hazelnut gelato probably won’t much attention. But it should.

Now that there’s a whole red-sauce movement, we probably don’t need to worry about clams oreganata and chicken scarpariello going extinct any time soon. But there’s a certain kind of Italian American restaurant that is disappearing, the mom-and-pop places whose reputations rarely spread more than a subway stop or two away. When these go under, they are not usually replaced.Cafe Spaghetti gets their spirit right, at least in the ways that matter most to a neighborhood.