Good morning. We’ll look at a big-money donation that will help Hunter College address the need for nurses and nurse practitioners. We’ll also look at a law that takes effect next week and will allow women to sue New York State over allegations of sexual abuse in prisons going back decades. 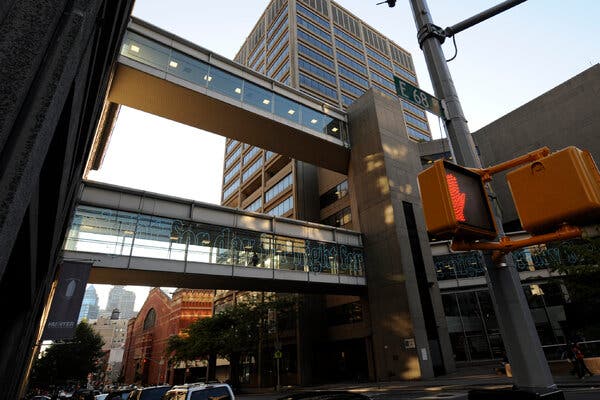 This has become a week for big-money announcements that include the name Lauder.

On Tuesday, the Estée Lauder cosmetics conglomerate announced that it was buying the Tom Ford fashion brand for $2.8 billion.

Today, Hunter College will announce that Leonard Lauder, the chairman emeritus of the Estée Lauder Companies, is giving $52 million to Hunter’s nursing school in honor of a Hunter alumna — his late wife, Evelyn.

Hunter will use the money to expand its 1,200-student nursing school at a time when a national nursing shortage has been compounded by the pandemic. Jennifer Raab, Hunter’s president, said it was the largest single donation ever made to a school that is part of the City University of New York.

The plan is to enhance Hunter’s existing graduate-level program for nurse practitioners, who are registered nurses with advanced training that allows them to do many of the things doctors do. They are becoming the health care provider of choice for millions of people, according to the American Association of Nurse Practitioners, with the experience and authority to order diagnostic tests, treat chronic conditions like diabetes and high blood pressure and write prescriptions.

Lauder’s money will also cover a new community care nurse practitioner program named for Evelyn Lauder that will provide $30,000 stipends for 25 students a year. In return, they will commit to work in neighborhoods in the city where medical care is lagging.

“This is going to provide higher-quality care for people who would not otherwise have access to it,” Raab said.

Raab said the stipends did not have to be spent on tuition, which could let recipients take time off from their jobs and finish their training sooner than if they were working and going to school at the same time.

Hunter is setting up an employment pipeline with the city’s Health and Hospitals Corporation. “If you’re Columbia or N.Y.U.,” Raab said, “you have a hospital system to place your nursing students in. It’s a challenge for a public school like Hunter without its own hospital system.” The Health and Hospitals system is a natural fit, she said: “Given the diversity of our nursing students, having them committed to serving HHC will assure better health outcomes and better health equity for the city.”

Lauder’s $52 million will also cover a new clinical learning lab with diagnostic equipment that nurse practitioners need to be familiar with, and it will pay for two new administrative positions and two endowed professorships in the nursing school.

Raab said it was appropriate to name the new program for Evelyn Lauder, who graduated from Hunter College High School in 1954 and Hunter College four years later. Raab said she had “lived the Hunter motto, mihi cura futuri — the care of the future is mine.”

It’s a mostly sunny day, with wind gusts and temperatures near the mid 40s. At night it’s mostly clear. Temps drop to the low 30s.

In effect until Nov. 24 (Thanksgiving Day).

Another chance to sue over long-ago abuse

Sadie Bell said she suffered an ectopic pregnancy that left her infertile after she was raped by a prison sergeant at the Bayview Correctional Facility in Manhattan.

It happened long ago, said Bell, 61 — so long ago that the statute of limitations for legal action has run out.

But Bell is looking to sue New York State under legislation that gives survivors of sexual abuse a one-time opportunity to file civil suits.

The new law, the Adult Survivors Act, goes into effect on Nov. 24. Like the Child Victims Act that passed in 2019, which extended the statutes of limitations for those abused as children, it allows people to file allegations about mistreatment in state facilities, including prisons. State Senator Brad Hoylman of Manhattan, who is the chairman of the State Senate Judiciary Committee, said it set no limit on how much the state might have to pay to settle such cases.

“These women are part of a vulnerable group of people who suffered under the system and those in power,” he told my colleague Chelsia Rose Marcius.

New York lawmakers expected current or former prisoners to sue. But some legislators — and even lawyers at one firm that has handled other types of abuse cases — were surprised by the large response from women who have served time, a group often overlooked because of the stigma prison carries. That firm, Slater Slater Schulman, is preparing at least 750 civil suits on behalf of women who were incarcerated. Some cases date to the 1980s and 1990s.

Some of the suits the firm plans to file will name cities and counties and their jails as defendants, including Rikers Island, the troubled New York City jail complex. Ben Crump, a prominent civil rights attorney who represented the families of Black victims of police violence, including Breonna Taylor and George Floyd, has partnered with Slater Slater and Schulman on some of the suits.

The state Corrections Department has a long history of sexual abuse inside its prisons. The Department of Justice investigated allegations in the early 1980s at Bayview, a medium-security prison on the Far West Side that was evacuated before Hurricane Sandy and never reopened. Thomas Mailey, a spokesman for the Corrections Department, said in a statement that the agency has “zero tolerance for sexual abuse, sexual harassment, and unauthorized relationships,” and that it investigates all reports of sexual victimization.

Bell, who had the ectopic pregnancy, said she was placed into solitary confinement for weeks immediately after the rape, by a sergeant at Bayview. She said she was transferred to the Bedford Hills prison in Westchester County when officials learned that she was pregnant.

Soon after she was moved there, she said, she experienced searing pain and was taken to a hospital, where she was cuffed and shackled. A fallopian tube had ruptured; she lost five pints of blood. She became infertile as a result.

“I haven’t really received treatment for all of this,” she said of the assault and the trauma that ensued. “Every therapist I had was either falling asleep or yawning when I told them the story. And then I didn’t want to tell it anymore.”

A man carrying grocery bags gets on a No. 2 train at 72nd Street and sits down. He takes a plastic container of dried fruit chips out of a bag and struggles unsuccessfully for several minutes trying to open it.

Frustrated, he looks up. A woman in business attire who is sitting across from him and has been watching him struggle reaches into her purse and pulls out a nail file.

Give it to me, she says.

The man hands over the container. The woman opens it easily with the nail file and hands it back.

He offers her some of the chips. She accepts, and they munch away as the subway rolls on.

Melissa Guerrero and Ed Shanahan contributed to New York Today. You can reach the team at nytoday@nytimes.com.

Tags
Said She That Who Will

Myanmar Frees Former British Ambassador and Others in Amnesty