In June 2021, Monique Foulger reached a major milestone: At 30 years old, she bought her first home, a modest one-bedroom flat in Croydon in South London.

Barely a year and a half later, she’s bracing for a nearly 80 percent jump in her monthly mortgage payments.

Sharp increases in interest rates are set to upend Britain’s housing market and rock the country’s already weak economy. Britain’s homeowners are especially vulnerable because most mortgages have short-term fixed rates, which renew every few years, often every two or five years. For more than a decade, ultralow interest rates let British homeowners hop carefree from one low rate to another.

Now, the central bank has abruptly ended the era of easy money as it fights inflation, and millions of homeowners are facing hundreds, possibly thousands, of pounds in extra payments each year.

“I just put my head in the sand,” Ms. Foulger said of when she first heard how much higher her payments were likely to go.

By the end of next year, two million mortgages in Britain will have reached the end of their fixed terms. The change is even harsher for the 1.6 million borrowers on variable mortgages that tend to move with each change in the central bank’s rate. At its last meeting, the Bank of England raised its interest rate three-quarters of a percentage point, the sharpest move since 1989, taking it to 3 percent, the highest since November 2008. Mortgage rates that were typically below 2.5 percent are jumping to potentially above 5.5 percent. 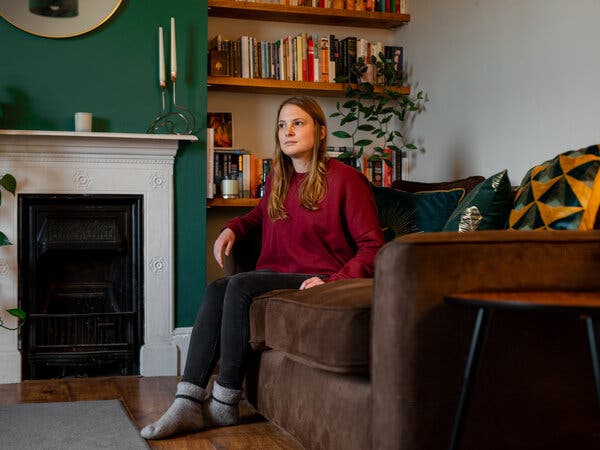 Ms. Foulger said she initially didn’t see any urgency in getting a new loan agreement, since her current one still had six months to go. “I just put my head in the sand,” she said.Credit…Sam Bush for The New York Times

Houses in Finchley, London. The Bank of England raised its interest rate three-quarters of a percentage point this month, taking the rate to the highest it has been since November 2008.Credit…Sam Bush for The New York Times

The reverberations are spreading through the economy. Consumer spending is set to collapse as households’ disposable income vanishes to pay for larger mortgage payments on top of higher energy bills and rising food prices.

Despite the impact on mortgages, Andrew Bailey, the governor of the central bank, has said interest rates need to rise further to combat double-digit inflation spurred by pandemic-related supply chain backlogs and volatile energy prices in the wake of Russia’s war in Ukraine. On Wednesday, data showed the annual rate of inflation had reached 11.1 percent. “There is no easy outcome to this,” Mr. Bailey said this month.

What is inflation? Inflation is a loss of purchasing power over time, meaning your dollar will not go as far tomorrow as it did today. It is typically expressed as the annual change in prices for everyday goods and services such as food, furniture, apparel, transportation and toys.

What causes inflation? It can be the result of rising consumer demand. But inflation can also rise and fall based on developments that have little to do with economic conditions, such as limited oil production and supply chain problems.

Is inflation bad? It depends on the circumstances. Fast price increases spell trouble, but moderate price gains can lead to higher wages and job growth.

How does inflation affect the poor? Inflation can be especially hard to shoulder for poor households because they spend a bigger chunk of their budgets on necessities like food, housing and gas.

On Sept. 23, when Ms. Truss’s finance minister, Kwasi Kwarteng, announced the tax-cutting plan in Parliament, Ms. Foulger was on vacation in France.

Eager to rest after a busy summer season at the opera company where she works, Ms. Foulger didn’t instantly respond to her mortgage broker’s incessant efforts to reach her about a new fixed-term agreement on her loan. She had six months left on her current rate — which was just 1.56 percent — and didn’t initially see the urgency.

But across the English Channel, the mortgage market was quickly fracturing. Homeowners were scrambling to fix their rates before the rates rose more, while banks were pulling mortgage offers because bonds markets were moving too violently to allow them to price agreements.

In the end, Ms. Foulger tentatively agreed to a fixed rate of 5.89 percent for two years, bumping her monthly payments up to 791 pounds ($941), from £444. The change won’t take effect until the spring, but, already anxious about increase, she said she had started cutting back on dining and socializing.

“It was rushed,” she said. The broker was “scared things would go up again.”

Over the past month, almost all of Ms. Truss’s policies have been reversed. Government bond yields have dropped, and traders have significantly lowered their bets on how high the central bank will have to raise interest rates. Even so, mortgage rates have hardly budged. On Wednesday, the average two-year fixed rate was 6.25 percent, down slightly from a peak of 6.65 percent on Oct. 20, according to Moneyfacts, a financial information service

Ms. Foulger, like millions of others, is hoping these mortgages rates fall further, so that by the time her current arrangement expires in March, she may be able to opt out of her 5.89 percent offer and get something better.

Deciding when to go with a new mortgage offer is the dilemma facing households across the country: Sign now and buy some certainty or wait and hope that rates fall, even if it’s only a little.

“The natural inclination will be to fix, but they’ve got this kind of nagging doubt about whether the rates may just come back down again,” said David Hollingworth of L&C Mortgages, a large broker and advisory firm.

Dan Taylor, 39, has been going back and forth over what to do. The two-year fixed rate on the mortgage for the three-bedroom Victorian house that he and his wife own in Exeter, in the southwest of England, expires as the end of February.

When they bought the house in 2008, they paid £900 a month. “Then everything went in our favor,” Mr. Taylor said. Interest rates came down, and the mortgage payments fell to £500, with renewals every two or three years.

“We’ve been so unusually spoiled for so long with such low rates,” he said. But now, it’s a tougher situation, he said. They have two young sons, increasing the couple’s expenses while restricting the hours they can work because of child care needs.

For weeks, Mr. Taylor has been regularly checking the new rates his lender is offering. In recent days, they have improved a little, but he’s still expecting his monthly payments to jump by at least £150.

Interest rates have risen so quickly that Mike Lawlor of Mortgage Advice Bureau, who has been a broker for nearly two decades, was blindsided.

“We could kind of see the rates creeping up” earlier in the year, he said. “Although I’d be lying if I said I thought the rates would be anywhere near here.”

His phones, he said, “haven’t stopped ringing.” He said his customers, ensconced in one of north London’s affluent neighborhoods with homes worth £1 million to £3 million, were worried about rising rates — and rising costs generally.

“It’s not just the mortgages, it’s everything,” he added. “It’s a real kind of tsunami at the moment with people being hit from all angles.”

For now, there are few expectations that rising interest rates will lead to large numbers of defaults and repossessions of homes. Banks are being told by Britain’s top financial regulator to do more to support customers in financial difficulty, while stricter affordability tests since the 2008 financial crisis mean households should be in a better position to manage a jump in rates.

And banks themselves seem relatively sanguine, recently noting to shareholders that defaults are low. “U.K. banks have capacity to weather the impact of severe economic outcomes,” the Bank of England committee that monitors financial stability risks said last month.

But even without repossessions, the impact of rising mortgage rates is expected to be far-reaching. There are signs of the strain in the housing market: House prices fell in October for the first time since July 2021, according to Nationwide Building Society, a mortgage lender. Experts warn that it will be harder to get mortgages to buy rental properties, while fewer first-time buyers will qualify under more stringent affordability tests.

Mete Coban, 30, switched to a so-called fixed tracker rate in March, which has a portion that doesn’t change and the rest moves in line with the central bank’s rate. At the time, the Bank of England had raised rates a few times, up to 0.75 percent, back to where they were before the pandemic.

“I took it with the risk” that rates could rise, Mr. Coban said. Because they had been so low for so long, the worst he feared was maybe a rate of 1 percent. “That’s still manageable, but who would have ever seen the 3 percent?”

Now, he estimates that he will pay £450 more a month than he was paying in March for his flat in Hackney in east London.

Mr. Coban, like many others, is animated by the failure of Ms. Truss and Mr. Kwarteng’s economic policies.He is an elected official in his local council and on the shortlist to stand as a member of Parliament in west London for the opposition Labour Party, which has gained a large lead in opinion polls recently.

Ms. Truss and Mr. Kwarteng’s decisions “directly impacted so many households and people’s livelihoods,” he said. “Even if they’ve lost their job, they’re no longer prime minister and chancellor, we are still left to pick up the pieces.”

Apartment buildings in Stratford, London. Experts warn that it will be harder to get mortgages to buy rental properties.Credit…Sam Bush for The New York Times
Tags
Mortgage Said She That With

Why Office Buildings Are Still in Trouble