DIAMNIADIO, Senegal — Ask those who have watched Aliou Cissé take Senegal to two World Cups in a row and direct his team to a victory in the Africa Cup of Nations in February, and they will tell you that his country’s wealth of soccer talent is only one part of the reason.

There is something more tedious, more long-term, but far more transformative that Cissé, the 46-year-old former Paris St.-Germain midfielder and former Senegal captain, has brought to his squad since he became its coach in 2015.

“He has turned Senegal into a real professional team, which it wasn’t before,” said Saer Seck, an administrator who led Senegal’s delegation to the last World Cup, in Russia in 2018.

Most African teams don’t have the resources of their European or Latin American counterparts. But in recent years, Cissé has brought some structure and consistency to the national team, Seck said. He has made sure, for instance, that all players arrive in Senegal on the same day whenever they are scheduled to play an international game — a small detail that wasn’t always the case before he took charge.

“When my guys leave Europe to play with us, they need some time to adapt and shift their mind-set,” Cissé told The New York Times in an interview earlier this year. “It’s a little festive,” he said of life for those returning home. “So we’ve got to tell them, ‘Hey, yes, life is sweet in Senegal, sea and sun, etc., but you’re not on vacation. It’s the same intensity here.’”

And that, he said, “is where this team has made a lot of progress.”

The team now travels in private jets and with police officers, a novelty. Its players sleep in better beds, stay in better hotels, and head to training and matches in buses and planes that depart on time. None of those things — all common at the European clubs where most of the players spend the bulk of their time — were a given in the national team’s recent past, or for much of Africa.

Whether that will be enough for Senegal, the African champion, to break through at the World Cup is another question. Only three African teams have ever reached the semifinals at the World Cup, and only one (Ghana in 2010) has advanced that far since a Cissé-led Senegal achieved the feat in 2002. Senegal will face the Netherlands on Monday in its opening game.

After Senegal earned its qualification in March, Cissé sat down with The New York Times to discuss his team’s chances, the limited number of World Cup places for African teams and where African soccer is headed.

This conversation has been edited and condensed, and took place before Senegal’s best player, Sadio Mané, was injured on the eve of the World Cup.

What are your ambitions for this World Cup?

A few editions ago, we went to the World Cup to discover the competition. Then, we were there to learn. Now, we’re here to compete. African teams are going to Qatar to win. When I look at my midfielders, my defenders, my goalkeeper, I have nothing to envy to, say, France or Spain. Kalidou Koulibaly is as valuable as Marquinhos for Brazil or John Stones for England. Hugo Lloris isn’t better than Édouard Mendy. That’s the kind of confidence I want my players to have. I want them to tell themselves that if France can win, why not us? 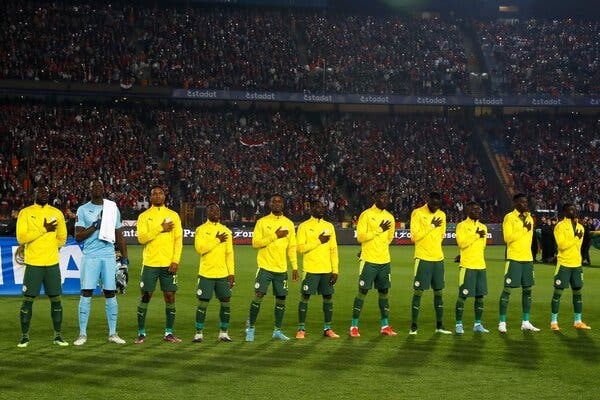 African teams have struggled in recent World Cups. Why is that?

The more you are there, the more chances you have to go all the way to victory. In Africa, we are 54 countries, and we can only have five teams qualify. While Europe has 13.

What matters in the World Cup is experience. To win it, you must participate again and again. But how do you want to have experience if you go to the World Cup every 20 years? It bothers me to hear that African teams haven’t had their breakthrough when we look at the African qualifiers.

It’s worse than martial arts. It’s like throwing a bone in the middle of a bunch of dogs: What do you think the dogs that get out of the fight will look like? These are the difficulties on the African continent: the number and the quality of opponents you need to get past to make it to the World Cup.

I could give you the names of 10 teams that would all be able to represent Africa, and that top five is better than the bottom five of European teams. Think Senegal, Ivory Coast, Cameroon, Nigeria, Ghana, Egypt, Morocco, Tunisia, Algeria, South Africa. …

The more of us that go, the more we will exist.

Should FIFA reduce the number of places that go to European teams?

I don’t know, but we can’t keep going with a continent like Africa that represents so much for global soccer and only has five spots.

We exist. We have great players. We have contributed to the development of soccer. We should be able to play our part. Give us the possibility to exist, and we’ll have more chances to go to the semis, the final, and to win.

You’ve been the coach for seven years, an exception in Africa that many say is necessary to take a national team to new heights as you’ve done. Why you?

From 2002 to 2015, not one coach stayed for more than two years in Senegal. How do you want to accomplish anything? It’s impossible, and our leaders had to understand it. They did with me.

When I took over the team in 2015, people were asking: “Why are you giving him the team? He has no experience.” But I knew the expectations and the reality of this national team.

I was captain of this team. Then I got my coaching diplomas. Then you need to build a team, a group, with motivated, patriotic players, who don’t fake it when it comes to bringing joy to their country. With years, you become more confident in what you do, and you learn how to manage the more uncertain moments.

I expect my players to take the country forward because the expectations are high. We have great players who can beat the best teams. But we also have a group. Everyone fights to get the ball back. Whether Sadio Mané is on the attack or defends, he spends it all on the pitch. That’s because we want to accomplish something big.

A mural of the Senegal star Sadio Mané in Dakar.Credit…Carmen Abd Ali for The New York Times

What has changed between the Senegalese national team you captained at the 2002 World Cup and the one you’re now coaching?

The mind-set. In Senegal, we used to have fan clubs cheering for one player or another: one for El Hadji Diouf, one for Aliou Cissé. Today, people come to watch a team. Our players wear the national jersey. They’re proud to be Senegalese, proud to be African.

When it comes to our fighting spirit, dedication and love for their country, this team is an example. I’m proud to say that people recognize themselves in this team.

What’s tricky, and what people sometimes forget, is that unlike in a club, we don’t have much time. People think that national teams can play like Real Madrid, Barça or P.S.G., but we simply don’t have the time to train toward that level. Every game is decisive. You need to win to keep hoping, while in a club you can lose one game and get back on track the following week.

With the national team, I expect more commitment from our players because of that. As a player you may wear four, five, six jerseys in your career, but you’ll always have one national team.

Tags
Africa One Senegal Team That

What to Expect From the U.K.’s Budget Proposals Today