As traditional public schools in the nation’s largest system endure a perilous period of student loss and funding shortfalls, New York City’s charter schools are on an upward trajectory.

The schools gained more than 10,000 children during the pandemic, though the expansion slowed last year, even as enrollment at other schools across the city — both public and private — fell steadily.

Mayor Eric Adams has been more open to charters than his predecessor, Bill de Blasio, who at times battled publicly with charter leaders in the city. The mayor’s campaign was backed by charter advocates, and several top officials at the education department are alumni of the Bloomberg administration, which helped launch the city’s charter school movement.

It would seem an auspicious moment for the charter sector in New York, which has boomed from a nascent movement in the 2000s into a force of more than 250 schools. Gov. Kathy Hochul said for the first time last month that she would be willing to let more charters open.

But charters still face significant headwinds, as most Democratic lawmakers remain firmly opposed to allowing any expansion of the schools, concerned in part that it would come at the expense of traditional district schools. Their skepticism has stunted the sector’s growth in recent years, restricting its foothold in New York much more than in several large cities, including Washington, D.C., and Philadelphia. Teachers’ unions, too, are major political players and disapprove of the schools, which tend not to be unionized. 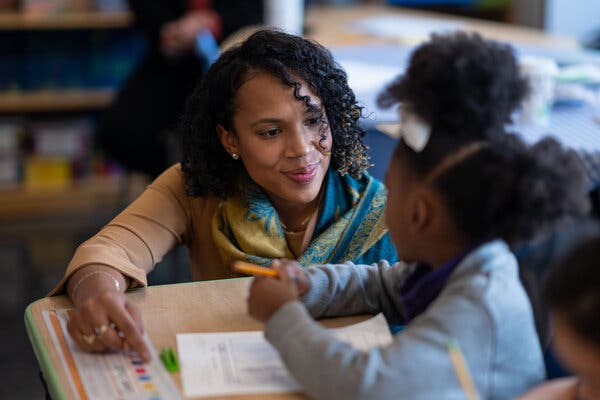 Principal Ana Collado works with a student during a class at Zeta Charter School in the Inwood neighborhood of Manhattan.Credit…Mostafa Bassim for The New York Times

Their very success in attracting new students could intensify the battle over their expansion, as New York City schools scrap over a declining pot of funding.

“We’re in an interesting place where we might make some headway,” said Stacey Gauthier, the interim executive director of the Coalition of Community Charter Schools and principal of the Renaissance Charter School in Queens, one of the city’s oldest charters. “But I’m not sure some things are going to move as fast. We still have a ways to go politically in Albany.”

Charter schools, which are publicly funded but privately run, educate about 13 percent of children across New York City. Their overall enrollment has steadily climbed, from roughly 113,000 students in 2017 to just under 140,000 last school year, as many schools opened new grades.

District schools historically enrolled more than 1 million students, but lost more than a tenth of their pupils over that time period and now enroll about 903,000 students. The rate of decline has slowed, but the system still lost 1.8 percent of its students last year, preliminary data shows.

Across the nation, traditional public school districts have experienced large drop-offs linked to declining birth and immigration rates. In New York, more than 57,000 children left the city for other counties or states last year alone, according to the education department.

Students who switch to charters have not been a primary reason for these declines, but about 15,000 children moved to charters from traditional public schools last year, the education department said. Other students left charters, so the number of students at the schools grew by only about 1 percent last year, by far the smallest rise in recent history. State officials will release full enrollment data for the current year this winter.

Many charters are still building out by, for example, adding new elementary grades or middle schools. Without those expansions, the sector’s overall enrollment in the pandemic would have been mostly flat or down, similarly to private schools, data shows.

In other cities that were losing significant numbers of students even before the pandemic, such as Chicago and Oakland, Calif., bitter local fights erupted when traditional public schools were forced to close as charters continued to expand. Families and teachers’ unions have argued that charter growth comes at the expense of district schools since funding usually follows students.

Charters have also faced criticism over the years over their financial transparency and findings that some tend to exclude certain high-needs groups such as students with disabilities. They have also been criticized over the rigid approach some took to discipline, suspensions and holding back students in their grades.

Students attend a Taekwondo class at Zeta. Some charters have loosened the “no excuses” culture that many were known for in the early days of the movement, after criticism that it was too harsh.Credit…Mostafa Bassim for The New York Times

In New York, a statewide cap on the number of charters has prevented exponential growth of the schools. John Liu, a Queens Democrat who chairs the State Senate’s New York City education committee, said a proliferation of charters “would be a disaster” for district schools, adding that he has “not been presented with any cogent arguments” for raising the cap.

“Do we have more tax dollars to divert to charter schools?” Mr. Liu said. “I don’t think so.”

But some families in New York have clamored for more access to charters, which typically outperform district schools in math and reading on state standardized tests, though results often vary widely between individual schools. The vast majority of students in charters are Black and Latino, and about two-thirds of charters are in Brooklyn and the Bronx. About two-thirds of children in district schools are Black or Latino.

Facing criticism, some charters have toned down features that were once contentious hallmarks of the schools. Strict classroom standards and rigid discipline rules that came to be known as a “no excuses” model have been replaced in several networks with a stronger emphasis on “the whole child.”

The changes have helped ease anxieties among some parents.

On one recent Tuesday at a Zeta charter school near Inwood — part of a young, growing network of four schools across Upper Manhattan and the Bronx — two dozen second graders circled up in Room 101 to practice breathing exercises. Then, the children dwelled on a single word that captured their feelings for the afternoon.

A young girl, Jia, had not seen her father in days, as he traveled in Florida. It was tough to focus on school, given how much she missed him. So her teacher asked the class: Would a volunteer check in on Jia by the end of the week?

Most of the 7- and 8-year-olds perked up, and eagerly threw their hands into the air.

“They talk about their emotions more,” said Dennise Ramirez, whose 8-year-old son, Akilles, attends a Zeta school. “And I can see the difference in him.”

Her inquisitive son previously attended P.S. 187 Hudson Cliffs, the district school that Ms. Ramirez attended herself as a child. But when schooling was disrupted as the coronavirus spread, she noticed that Akilles seemed disconnected from his classes. She weighed her options, and decided to move him to Zeta for third grade this fall.

“The approach really caught my attention,” she said. “Especially after the pandemic.”

Charter schools have tended to post high achievement scores on standardized tests as a sector, although results vary among individual schools.Credit…Mostafa Bassim for The New York Times

But Basil Smikle, a public policy professor at Hunter College who has served on the board of directors of several city charter schools and groups, said he has also wondered whether some major supporters will eventually grow “tired of giving the money” in a tense political environment, and as traditional public education struggles.

In the wake of the Trump administration’s eager embrace of charters, school choice and privatization, charters have become a tough subject for Democrats, and Mr. Smikle said the schools have lost outspoken local champions in neighborhoods like Harlem and the Bronx.

“That larger shift in Black and brown politics in New York does really matter in terms of how much the charter sector can grow,” he said.

No new charter school licenses have been issued in the city for three years, after the cap set by the State Legislature was hit in 2019. Since then, several top charter priorities have languished in state budget negotiations, including efforts to raise the limit.

Mr. Adams has said that he believes lawmakers should explore allowing so-called zombie charter licenses to be reissued after schools close. But he has not publicly supported a cap lift and rarely spoke about the schools in his first year. The mayor also struggled to advance his agenda in Albany this year, falling short on his education priorities in particular.

It also remains unclear whether Ms. Hochul, who said last month she believes the cap should be raised, would spend her own limited political capital to push for any changes. (A spokeswoman for the governor, who was supported by teachers’ unions in the race, did not return a request for comment on the specifics of her position.)

Students hug each other during their weekly community circle at a Zeta Charter School. Social and emotional learning is now incorporated into lessons in many charters.Credit…Mostafa Bassim for The New York Times

While the road ahead for the sector is likely to remain turbulent, several charter leaders have hoped that the new schools chancellor, David C. Banks, can usher in a stable relationship with education officials.

Mr. Banks — who borrowed several ingredients of charters when he ran his own network of public all-boys schools for low-income Black and Latino boys — has said himself he hopes to find ways to collaborate.

“Many of the charter schools do have something to offer in terms of lessons learned,” Mr. Banks said at a recent community meeting of Brooklyn families. “I really want to get us past this point of almost ‘us against them.’”

Like a Record, LeBron James’s Age Is Just a Number