MONTICELLO, N.Y. — Soon after the white coach bus pulled up on a recent Monday morning, the passengers stepped off into the frigid cold. Outside, they rushed to the nearest tree, railing, wall or grassy knoll to stash their plastic bags crammed with thermoses of rice and soup.

With their lunches stowed away, they headed into the gleaming casino at the end of the sidewalk.

And so began the routine for the hundreds of older Chinese immigrants who ride the bus two hours north every morning from New York City to the Resorts World Catskills casino in Monticello, N.Y., collecting a $45 slot machine voucher with each trip.

The scene illustrated a longstanding phenomenon in the industry: people of Asian descent are among the demographics most targeted by casinos, and casino buses have been ubiquitous for decades in Chinatowns and Koreatowns across the country. With New York City set to get its first full-service casino in the coming years, and potentially three of them, Asians are expected to be a core customer base, deepening a complicated relationship the community has with casinos.

Many of the city’s older Chinese residents rely on the weekly bus routine for entertainment — and even income from selling their vouchers — as a way to deal with the isolation of living in a country where they barely speak the language.

But the constant exposure to gambling can also be a gateway to addiction and debt, exacerbated by sophisticated casino marketing and a lack of problem-gambling services for this population. Although there is limited research on the prevalence of gambling by race, studies have shown that Asian Americans are at greater risk of developing a gambling disorder than the population as a whole.

The effort to lure Asian gamblers will be a significant factor surrounding the casino bidding process in New York, which will begin early next year. State legislators had approved the new licenses hoping for more tax revenue and jobs, and regulators have said no decisions on casino locations will be made until “later in 2023 at the earliest.”

New York City is home to about 1.2 million residents of Asian descent, the highest of any American city. During meetings with prospective business partners this year, some casino operators scoping out potential locations have cited proximity to large Chinese populations as a top consideration, according to people familiar with the meetings, who spoke on the condition of anonymity. 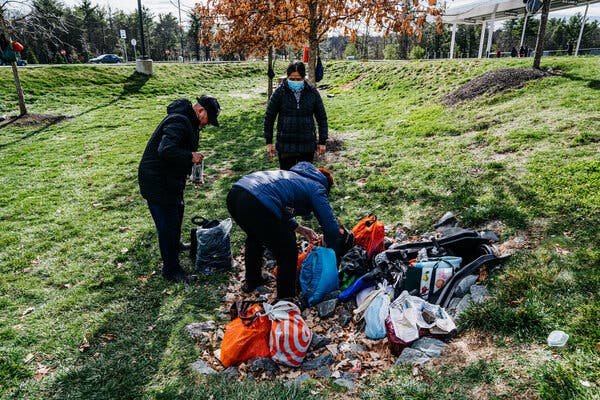 Casino-goers stash their lunches just outside the Resorts World Catskills.

It’s not yet clear how the expansion of casinos will affect rates of problem gambling among Asian New Yorkers. Industry experts said that any casinos in the city would have the advantage of proximity, most likely taking existing customers away from competing casinos in the region.

Customers of Asian descent are especially important for East Coast casinos near large metropolitan areas, and New York City is “the epicenter,” said Steve Karoul, a longtime industry consultant. The bus programs began decades ago when casinos wanted to attract players who did not own cars, he said. Many casinos contract with third-party bus companies to operate the buses.

“Gaming is fairly acceptable within the Asian communities, so they are a prime target for a lot of the casinos,” Mr. Karoul said. He added that large casinos train employees to intervene if they see signs of problem gambling among Asian players. “You don’t want to kill the goose that lays the golden egg,” he said.

Casino bus programs began decades earlier as a way to attract customers who did not own cars.

Many casinos have built up Asian marketing departments for decades, targeting a wide range of ethnicities and age groups. Some focus on attracting older Chinese, Korean or Vietnamese immigrants, for instance, while others also tailor their food and entertainment options to appeal to younger Asian Americans coming with their extended families, according to industry consultants.

Before the pandemic, some casinos flew V.I.P. gamblers in on first-class flights from cities like Singapore and Taipei.

But the image of the international high roller is sharply at odds with what unfolds on the gambling floor after the casino buses pour in on weekdays, carrying large groups of older immigrants living on poverty wages.

In New York, many people ride the casino bus not to gamble but to sell the free slot machine vouchers to other players as their primary form of income. The vouchers are one of many promotions casinos use to lure customers of all races.

Guofu Zheng, who rides the bus regularly from south Brooklyn, said in an interview from the Resorts World Catskills gambling floor that he and his wife can make $45 per trip. He did not elaborate. Casino policy prohibits customers from transferring their slots cards to other players.

A former restaurant worker, Mr. Zheng, who declined to give his age, said no one was willing to hire him because he no longer has the stamina for manual labor. He used to gamble more frequently at casinos in Pennsylvania and Connecticut but, at the urging of his wife, has limited himself these days to low-stakes slot machines, he said.

Guofu Zheng, a regular visitor to the Resorts World Catskills, said riding the casino bus allowed him to make money at a time when he has struggled to find work.

Going to the casino made it possible for him to meet other Chinese immigrants from his native Fujian Province and to walk around the woods on the property, allowing him to “be happy for a bit,” he said in Mandarin.

“As you get older, staying at home is very lonely,” said Mr. Zheng, sipping a free plastic cup of red wine handed out by a casino hostess.

In a statement, Peter Chan, the vice president of international marketing at the Resorts World Catskills, said the casino took “great pride in providing our guests from the Asian community a beautiful environment and welcoming space inside and outside of our property, where our culture is respected and celebrated.”

Last year, a report funded by the Massachusetts Gaming Commission found that the stress and social isolation experienced by working-class Asian immigrants made them more susceptible to casino advertising, raising concerns about whether casinos were exploiting a vulnerable population.

After interviewing 40 people from Cambodian, Chinese, Korean and Vietnamese communities in the Boston region, the writers of the report said that casino gambling gave immigrants in low-wage jobs a “false sense of accomplishment.” Even as many of the people surveyed said they had borrowed money from friends or loan sharks to keep gambling, they also said casinos were the only entertainment option accessible to them.

“For many Asian seniors, they walk into any casino and don’t need to worry about cultural competence or respect or language,” said Don Lee, the chairman of Homecrest Community Services, which operates two senior centers in Brooklyn. “That’s the one place where they feel safe.”

Many immigrants ride the casino bus not to gamble but to sell the free slot machine vouchers they receive to other players as their primary form of income.

A longtime casino bus driver in New York City, who spoke on the condition of anonymity for fear of losing his job, described in an interview in Cantonese the mind-numbing effect of seeing the same riders on his bus for years.

Some of his passengers return to New York City at night, he said, only to board another bus bound for casinos in Pennsylvania. Since the pandemic started, the riders, some of whom are undocumented, have increased their reliance on casinos, he said, because stringent travel restrictions have prevented them from visiting friends and family back home in China.

On a recent Monday, shortly after 8 a.m., a white coach bus parked on the edge of Manhattan’s Chinatown neighborhood, one of at least a dozen buses departing from heavily Chinese neighborhoods in New York City that day. Every seat was full, almost entirely with repeat customers. “I ride this bus everyday,” one man said in Cantonese as he boarded. A woman whom the riders referred to as a tour guide stood at the entrance, collecting the $20 bus fare.

As the bus departed, the tour guide walked to the back. “Don’t talk, don’t take off your shoes and don’t eat,” she said in Mandarin.

For the passengers, the destination was not known as the Resorts World Catskills, but as “yun ding.” The translation means “top of the clouds,” evoking the aspirations of the bus riders.

The Resorts World casino is known to Chinese-speaking customers as “yun ding,” meaning “top of the clouds.”

After the two-hour ride, the passengers lined up inside the casino to get the $45 vouchers loaded onto their Resorts World play cards.

On the gambling floor, the baccarat tables immediately filled up. One woman put $600 down in cash, as another player, carefully flipping over the cards she was dealt, complained loudly in Mandarin that the casino’s hot sauce was not good.

There were televisions broadcasting Chinese news stations throughout the casino, attracting a crowd of people watching intently for updates about the war in Ukraine. Many people sat at the slot machines without playing, chatting with each other in various dialects from southern China.

Some customers said they came to the casino as a way to meet people from their native provinces in China who speak the same dialects.

In interviews, the casino-goers said they had read in Chinese newspapers that a casino might open in New York City. One man named Mr. Zhang, who asked to be identified only by his last name, was thrilled at the prospect of a shorter casino commute but said he would still go occasionally to the Catskills property for the scenery.

Mr. Zhang, 56, said he lost $70,000 gambling last year, prompting him to play more in the hopes of winning it back. He immigrated six years ago from Beijing, where he worked as a calligraphy teacher, but is now unemployed, he said. He rides the bus weekly from his home in south Brooklyn to play baccarat and other games.

He pulled out his platinum Resorts World card, saying he was prepared to stop gambling once he played enough to obtain a black card, the highest status.

“If only I could win a little bit every time I came,” Mr. Zhang said in Mandarin. “How great would that be?”

During lunchtime, the outside perimeter of the casino filled with people slurping up the steaming bowls of food they had stashed away earlier — because the casino prohibited outside food.

Some bus riders opted out of the casino altogether, setting up dueling card games outside on wooden planks that attracted a crowd of onlookers.

The outside perimeter of the casino became crowded at lunchtime with people eating from the thermoses and plastic containers they had brought from home.

When it was time to return to the city around 3 p.m., passengers began streaming back to the bus. As one woman walked to the casino exit, she stuck her hand into a crevice in the wall, where she had hidden a plastic soup container.

On the bus home, the sunset cascaded over the riders, some of whom were counting wads of cash. The tour guide walked down the aisle, collecting money from anyone who wanted to buy another bus ticket. Her plastic bag quickly filled with $20 bills. “I’ll be back in two days,” one rider said in Mandarin.

The next morning, the bus would leave from the same corner in Chinatown, and the routine would start again.

A bus picking up passengers from Manhattan’s Chinatown, one of several in New York City that depart each day for the Resorts World Catskills casino.

One Final Twist in the Rev. Louis Gigante’s Colorful Life: A Son

It’s Turtles All the Way Down in the Fossil Record