As spring bursts forth, wild turkeys begin the mating game. Groups congregate in lawns and fields — and sometimes in the middle of the street. Males puff out their iridescent feathers, fan their tails and drag their wings on the ground in a vie for the right to breed. Their faces and necks turn dazzling shades of blue and red.

Once rare and elusive denizens of America’s woodlands, these heaviest of the galliform birds (chickens and their relatives) have gone urban. Wild turkeys live in the residential neighborhoods around my home in Madison, Wis.

A few years ago, their elaborate courtship displays fascinated me so much that I began to photograph them — and, as I’ve learned, there’s more happening than meets the eye. 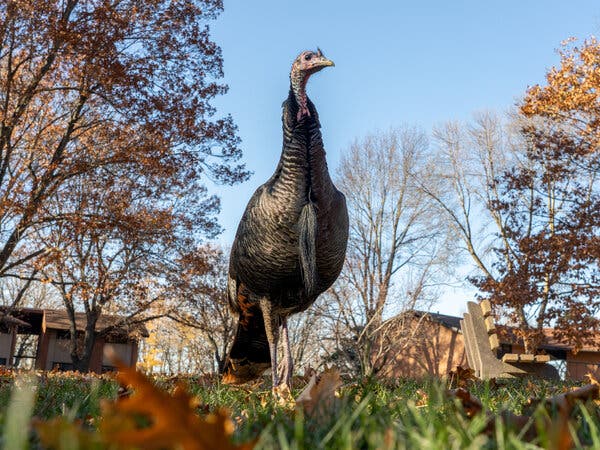 Outside of the breeding season, male wild turkeys (Meleagris gallopavo) are much drabber and often keep their snoods retracted.

For starters, turkeys of a feather flock together. Males, known as toms, can form lifelong flocks with their brothers. Dr. Alan Krakauer, a biologist and fellow photographer, studied this as a graduate student at the University of California, Berkeley. He discovered that toms in a flock were anywhere from full to half-siblings. These bands of brothers cooperated to court females, or hens, and chase off competing males.

Remarkably, though, only the dominant male mated and fathered offspring. The subordinate brothers served as “wingmen,” “bodyguards,” or “backup dancers,” to use Dr. Krakauer’s colorful descriptions. “They have what I think of as a support role,” he said.

A male wild turkey displays on the edge of a golf course in Shorewood Hills, Wis.

Despite the potential for lifelong celibacy, wingmen benefited from the arrangement, Dr. Krakauer found — at least by the raw calculus of evolution. On average, dominant males with wingmen produced seven offspring a season, whereas solo males produced fewer than one. Since the males were closely related, those seven offspring contained more of the wingmen’s genes than if they’d sired a single chick themselves.

“They’re helping their brother get a lot more females than either of them would get on their own, so this cooperation seemed particularly helpful,” explained Dr. Krakauer. “That seemed to be surprising for people at the time.”

Anyone who’s had a brother knows the vicissitudes of fraternal relations. While brothers generally cooperate during the mating season, intense fighting breaks out at other times, as they jostle for rank. Turkeys have formidable weapons: large bodies, powerful wings and spurred feet. On one occasion, I saw a fight so violent that spittle flew — like when a boxer is hit by a knockout punch.

While males are aggressive with each other, they aren’t aggressive toward females and do not force copulations, despite being twice the size of their mating partners. So while males may strut with abandon, females ultimately choose their mates. They’re picky about partners and know what they want: males with long snoods.

Snoods are the fingerlike fleshy protuberances that flop over a turkey’s beak. The animals can contract and relax muscles and blood vessels in their head and neck, causing changes in the organ’s length and color. A tom sporting a long red snood draws the attention of hens like flies to honey — although, to their credit, the hens manage to be coy about it.

Dr. Richard Buchholz, a professor at the University of Mississippi, has spent his career studying wild turkeys. He examined the role that various male ornaments — including snoods, caruncles (pebble-like bumps on the head and neck), skullcaps (thickened skin on top of the head), spurs (talons on the legs) and beards (tufts of hairlike feathers projecting from the chest) — play in female mate choice. He found that snood length was the primary factor that explained which male a female chose as a mate. Even a few extra millimeters made a difference.

“It did surprise me, especially since the snood doesn’t seem to be a very functional thing to choose,” Dr. Buchholz said. “Why the snood and not all the other ornaments on males?”

Only dominant males mate and father offspring. The subordinate brothers serve as wingmen.

The answer lies in a phenomenon with deep roots in biology: Fancy accouterments may indicate good genes. For turkeys, a male who can afford to sport a killer snood must have had ample resources, which ostensibly reflects the quality of his DNA. Dr. Buchholz found that males with longer snoods had fewer coccidia parasites, which don’t harm adults but can sicken or kill chicks, and possess genes that may make them resistant to coccidia.

Dr. Buchholz is still uncertain about the role some other male ornaments play. Like snoods, other fleshy structures on a turkey’s face and neck can change color during displays. For example, males will drain all the blood from the caruncles so they’re as white as a sheet of paper, Dr. Buchholz said. He remains unsure of what the change in the caruncles might signal, or why it’s important.

A male wild turkey mates with a female, which is about half his size, under a backyard bird feeder.

And what about those fancy feathers? “I don’t know if females care,” Dr. Buchholz said. The feathers of male turkeys infected with coccidia reflect less ultraviolet light, which turkeys (but not we humans) can see. However, no one has studied whether females scoff at dull feathers the way they do at puny snoods.

There’s still a lot to learn about wild turkey mating behavior. “For a bird that’s such a great conservation success story, that’s so common and interesting to people, and that has a cultural connection to the American Thanksgiving, for us to not know more about its behavior is really a shame,” said Dr. Buchholz.

Perhaps that’s not entirely surprising. Wild turkey populations are currently booming in many parts of the country, thanks to conservation efforts; in places like New England, Madison and Berkeley, they’re now so common that they get about as much notice from passing motorists as a traffic cone.

But that wasn’t always the case. Until recently, wild turkeys were rare in the United States — “which seems crazy now,” Dr. Krakauer said, “since they’re right in town and blocking traffic.”

Two males display to females during the spring breeding season in Madison.

Tags
About Can Said That With

How to Spend $1 Trillion? Mitch Landrieu Wants a Say.