BUFFALO — A snowstorm lasting through the weekend is underway on the eastern coasts of Lakes Erie and Ontario, where two feet of snow and thundersnow have already been reported.

Over two feet of snow have already fallen in places like Boston, N.Y., and more is expected today.

In central Buffalo, an early respite was quickly thrashed by a band of heavy midmorning snow, leading to whiteout conditions in the downtown corridor. Cars crawled along city streets, braking and sometimes brake-locking at intersections, as plows tried to keep up with the snowfall. In a sign of the speed of the storm, some squalls were quickly replaced by calmer conditions, with sun pushing through overcast skies.

The Skyway, a central north-south byway, was closed, and lights were off inside the ornate City Hall building and local courthouses.

Early on Friday, David Notaro, 62, a maintenance man, was plowing the sidewalk in front of the downtown cafe where he worked. “Thank God we didn’t get what they said we were going to get,” he said, referring to an earlier forecast that Downtown Buffalo would receive the brunt of the snowfall.

Instead, the storm shifted to south Buffalo, where it dumped feet of snow, with fierce winds making visibility difficult.

On early Friday morning, as dark clouds hung above, at least a dozen vehicles were stuck on the side of road in mounds of snow as local plow and salt trucks slowly navigated the streets. Several people on the southside of the city avoided the unplowed sidewalks, walking on the road instead, as a man on a snowmobile whizzed down the middle of South Park Avenue.

Forest Richardson, 29, a security guard who lives in downtown Buffalo, was on his way to work in the city’s southside when his 4-by-4 vehicle “did a 360” and became stuck in a snow bank. It took him about 20 minutes to work his way free. He said he was going to turn around and go back home.

Kathleen Sieg, 32, was out shoveling the sidewalk in front of her home with her young son. School was canceled and the packaging plant where she worked had also shut for the day. “I don’t know why people decided to drive in this,” Ms. Sieg said.

The Buffalo area was experiencing what is called lake-effect snow, which occurs when colder air blows over warm lake water. The air soaks up moisture from the lake like a sponge and creates bands of clouds, like in a thunderstorm, that release extreme snow over strips of land. 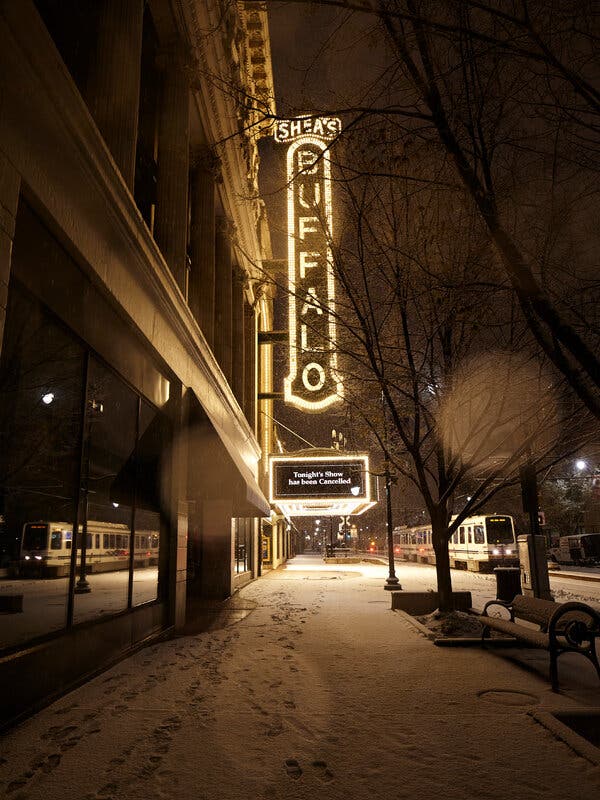 The Buffalo area was experiencing what is called lake-effect snow, which occurs when colder air blows over warm lake water.Credit…Brandon Watson for The New York Times

During these storms, the heaviest snowfall sets up in very narrow bands, similar to how water from a fire hose is focused on one area at a time. So, if the wind shifts the band just slightly, the worst snowfall could fall on one side of town and not the other.

“Areas to the north of the City of Buffalo and the airport will likely receive little to no additional accumulation through the day,” the National Weather Service forecasters in Buffalo said early Friday morning. “The heaviest snow will be along a line from Lackawanna and Hamburg inland toward West Seneca and Cheektowaga and Lancaster.”

While the worst might not have hit the heart of Buffalo, the southside of the metro area could still see the “paralyzing snowfall” forecast by meteorologists at the National Weather Service.

Tonight, the fire hose of snowfall is expected to keep shifting northward through Buffalo and toward Niagara County.

On Saturday, “the day will start off with an intense, singular band of heavy lake effect snow across the city of Buffalo, the northtowns and Batavia,” the weather office forecasters said. 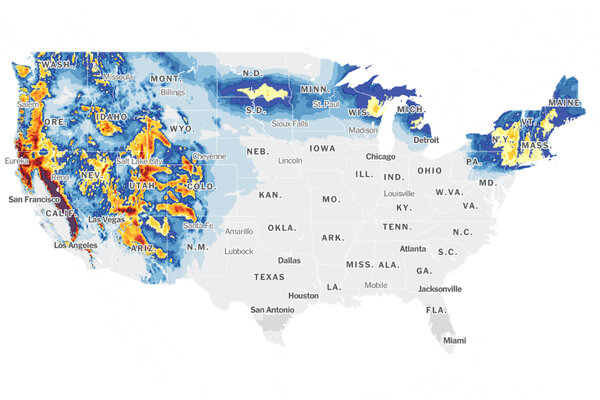 How Much Snow Will Fall Where You Live?

Type in your community to see the full range of possibilities in the next few days.

Tags
Buffalo Over Said Snow Was

As Griner enters a penal colony, Russia signals it is open to a prisoner swap.

A Lingering Gettysburg Battle: Where Did Lincoln Stand?

Does Inflation Disproportionately Hurt the Poor?