The Chicago Cubs beat the Cincinnati Reds, 4-2, on Thursday, but that was hardly the point.

Major League Baseball had once again found its way to Dyersville, Iowa, for its Field of Dreams game, and a sport that is struggling with its technological future got a reminder of how great the game can be when it is broken down into its simplest form.

“It’s really magic,” Cubs catcher Willson Contreras told reporters of the field, which is a short walk from the one used in “Field of Dreams,” the 1989 film starring Kevin Costner. “It has some kind of energy that I think is real.” 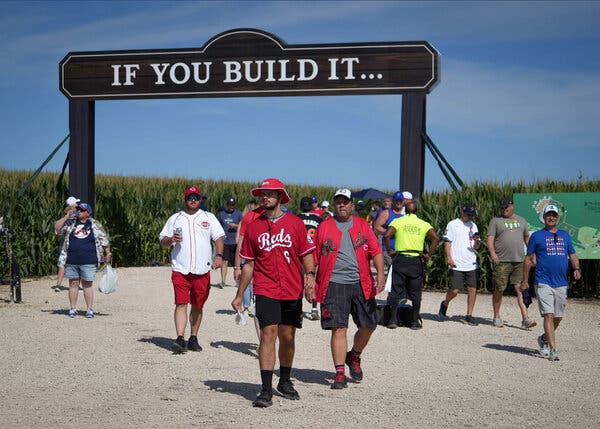 Fans toured the ground at the Field of Dreams stadium, which is walking distance from the original movie set.Credit…Byron Houlgrave/USA Today Sports, via Reuters

The Hall of Famer Ken Griffey Jr., a Reds alum, played catch with his father — a pretty good player in his own right — before the game, the scoreboard made Fenway Park’s seem modern and both teams wore throwback uniforms that harked back to the days when the rebuilding clubs were a bit more relevant.

“What they’ve done here is incredible,” Kyle Farmer, a third baseman for the Reds, told reporters. “I think every baseball player should experience this.”

As for the baseball, the Cubs stayed on the vintage theme by taking a 3-0 lead in the top of the first inning with a hit-by-pitch, two doubles and a single. Neither team homered into the corn stalks in the outfield this year, and the only real reminders that the game was being played in 2022 were that the teams combined to use nine pitchers and there were 26 strikeouts. (Chicago’s Drew Smyly earned the win by striking out nine in five scoreless innings.)

The scoreboard in Dyersville is extremely simple. The only mechanical parts are in the clock. Credit…Charlie Neibergall/Associated Press
Cincinnati’s Albert Almora Jr. looked and played the part of a vintage outfielder, snagging a fly ball in the ninth inning.Credit…Charlie Neibergall/Associated Press
The day ended with Willson Contreras and Rowan Wick celebrating on the mound in a stadium around 200 miles from Wrigley Field.Credit…Michael Reaves/Getty Images

Last year, the Yankees and the Chicago White Sox had faced off in the first of this now annual event, which is Major League Baseball’s answer to the N.H.L.’s outdoor games. While last year’s game had a little more sizzle, thanks to the matchup of contending teams, and a little more pop with an exciting game, the enthusiasm seemed to carry over despite this year’s edition not having anything of the sort.

The crowd of 7,823 people — nearly double the regular population of Dyserville — seemed thrilled with the event and the players were excited to get their chance at the experience which, at least for now, will only come once a year for two lucky teams.

“A game like this — you just feel like a kid again,” Smyly said. “You’re just out there playing baseball in the middle of Iowa.”

The announced attendance was 7,823, which is nearly double the population of Dyersville (4,100).Credit…Michael Reaves/Getty Images

The Poisoned Relationship Between Trump and the Keepers of U.S. Secrets

Anne Heche ‘Is Not Expected to Survive’ After Crash, Representative Says