SHARM EL SHEIKH, Egypt — Sometime in the next few days, the moment will come. Negotiators from among 200 countries with varied interests and motives will be sweating over terms and definitions as they strain to forge a global climate agreement. That’s when the woman known as “The Closer” goes to work.

Sue Biniaz, who was the State Department’s lead climate attorney for nearly three decades before being named the U.S. deputy envoy last year, knows where the semicolons are buried in all the important United Nations climate agreements. After all, she helped write them.

Ms. Biniaz is a word fiend who once wrote an academic paper about how punctuation is wielded in climate treaties, who tucks crossword puzzles into her purse and who once traveled with a thesaurus (now she uses a smartphone). She has a peculiar skill. She is the one negotiator among thousands who is most trusted to find the elusive word or phrase that can allow leaders at loggerheads to agree on a climate deal.

“Sue is really clever in her ability to wordsmith in ways that become acceptable to all parties, or most parties, which is no small talent,” he said. “She really gets into the nittiest nitty-gritty details, and with an understanding of how important they are to the outcomes.”

With the future of the planet at stake, the U.N. system that governments have adopted to address the climate crisis is steeped in legalese. The annual conference of the parties, or COP, is where diplomats can debate for hours over the use of “urge” as opposed to “request,” and where an errant comma once ground negotiations to a standstill.

The landmark Paris climate change agreement itself almost imploded during the final hours of negotiations in 2015 over a feud about the use of “shall” versus “should.”

On this battleground of words, Ms. Biniaz is widely recognized as a gladiator. In 2011,she broke a logjam among the United States, Europe, China and India to ensure that, for the first time in history, all polluters would be held to the same legal obligations in the quest to reduce emissions. Three years later, she crafted a six-word phrase that cinched an agreement with China and paved the way for the Paris Agreement. Once, she rescued a collapsing deal by using quotation marks.

“Sue is what everybody calls the closer,” said Daniel A. Reifsnyder, a retired longtime State Department climate official. 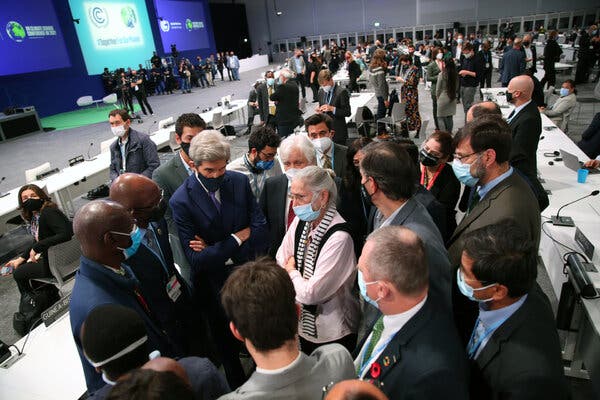 The affection is not universal. Ms. Biniaz has been known to rankle her European counterparts. Several people summed up her negotiating style as “I’m right, and you’ll understand why after I explain these three points,” which some feel is patronizing. “There’s mansplaining, and then there’s Sue-splaining,” said one European, who asked not to be identified in order to speak candidly.

Peter Betts, the former lead negotiator for Britain and the European Union, said he once got “the cold shoulder” from Ms. Biniaz over her conviction that the Europeans were too easy on China and other emerging economies.

Our Coverage of the COP27 Climate Summit

“She can be terrifying,” he said. But, he added, “there’s no lawyer in the process who comes close to her for sheer competence, but also for judgment and ingenuity.”

Ms. Biniaz is also widely viewed as America’s linebacker, blocking a proposal on what’s known as “loss and damage” that is turning out to be the most contentious issue at this year’s climate summit.

Developing nations want wealthy, industrialized countries to pay for loss and damage from floods, storms and drought that are made more devastating by climate change. The United States is resisting that call out of fear that it would expose the country to unlimited liability. As a practical and legal matter, it has been extraordinarily difficult to determine which nations would owe what and to whom.

“The pushback from the United States’ lawyers continues to happen,” said Ian Fry, a special rapporteur for the United Nations who represented the island nation of Tuvalu in the climate talks for 21 years. Mr. Fry negotiated the issue of loss and damage toe-to-toe with Ms. Biniaz at the Paris talks in 2015, where the United States won assurances that acknowledging the need to address climate disasters would not provide the basis for compensation.

Born and raised on Long Island, N.Y., Ms. Biniaz is the daughter of a Holocaust survivor. Her mother, Celina Karp Biniaz, was 14 when she and her parents were rescued from the Auschwitz death camp after landing on the “list” of Oskar Schindler, the Nazi Party member who saved the lives nearly 1,200 Jews by employing them in his factories.

In the classroom at Yale University. Ms. Biniaz was a key architect of the 2015 Paris accord.Credit…Frances F. Denny for The New York Times

Today Ms. Biniaz’s mother is a retired schoolteacher who lives in California and is one of the last survivors of the group known as of Schindler’s Jews. Her father, Amir Biniaz, a dentist, died this year.

Ms. Biniaz, 64, said she never knew much about her mother’s experience until a novel based on Mr. Schindler’s story was published in 1982 and later adapted into the film “Schindler’s List.” Her mother has had a second career as a public speaker about the Holocaust and is the subject of a new book.

Ms. Biniaz is not given to self-reflection about growing up as the child of a survivor. “I mean, it has affected me, I’m just probably not aware of how,” she said in an interview. “Maybe that’s not very introspective of me.”

As an undergraduate at Yale, Ms. Biniaz studied Russian. She graduated Columbia Law School with the goal of specializing in Soviet law. Then the Soviet Union collapsed.

Ms. Biniaz clerked for a federal judge and then joined the State Department in 1984 after a summer job that made her feel “like a kid in a candy store.” She held a number of roles, including developing space station agreements with other nations and setting up the United Nations’ premier climate science body, the Intergovernmental Panel on Climate Change.

Her Russian was so good that she once conducted a side-by-side assessment of an announcement between the United States and Russia in both languages, Mr. Reifsnyder said.

Her husband, Robert Harris is the assistant legal adviser for East Asia and Pacific affairs at the State Department. They have two sons.

As the lead climate lawyer for the State Department, Ms. Biniaz has missed only two U.N. climate summits in her career. She finds them “really addictive,” as they often require expertise on a range of issues, such as emissions trajectories, and intellectual property law.

During the Obama administration, she was an architect of the landmark Paris accord, which created a new global legal framework under which for the first time, all countries, not just wealthy nations, agreed to cut emissions.

Todd Stern, the U.S. climate envoy under President Barack Obama who negotiated the Paris accord, said he and Ms. Biniaz met nearly every weekend at a now-shuttered Le Pain Quotidien in Washington to talk strategy.

“I used to think of her as a sort of Zen master,” Mr. Stern said. Under U.N. rules, all 198 nations must approve every climate agreement; if one objects, it can crater an entire deal.

“You’d have this huge big problem, and then with three words, she’d fix it,” Mr. Stern said. “She could fix things with a comma. She’s deft that way.”

When President Donald J. Trump came into office promising to withdraw from the Paris Agreement (which he ultimately did), Ms. Biniaz left the government.

She joined Yale Law School as a lecturer and led an unofficial diaspora of officials from the Obama administration who worked to protect the Paris Agreement through the Trump years, reminding nations at U.N. meetings that American cities, states and other institutions remained committed to the accord.

When Mr. Kerry agreed to serve as President Biden’s climate envoy, he asked Ms. Biniaz to rejoin the government. “You don’t say no to John Kerry,” she said.

Her signature look — long denim skirt, button-down blouse, cardigan over her shoulders and white hair pulled into a bun — gives her the appearance of someone’s aunt about to break out her knitting. During high stakes negotiations, she stands out in a sea of men in dark blue suits. Colleagues call it “Sue’s uniform.” One of them dressed as her for Halloween.

“If you brought someone into a room of climate negotiators and said, ‘Pick out the person who is one of the savviest negotiators around,’ the answer is Sue,” said NatKeohane, the president of the Center for Climate and Energy Solutions, an environmental group. “But that is not immediately apparent. A lot of people overlook her, and she’s fine with it.”

For all of her skill with language, Ms. Biniaz occasionally wonders if her work has an impact.

“You might say, Are you just papering over differences?” Ms. Biniaz said. “Sometimes I do think about that. Am I perpetuating disagreements by finding a form of words that everybody can agree to? I don’t know if there’s an answer to that question.”

But ultimately, the right words matter, she said, because they define and demand action from the community of nations.

“It matters to me because it matters to the world,” Ms. Biniaz said. “Some people say it’s just words, but to me it’s like, what do you mean, it’s just words? International agreements are just words. It’s the reflection of what we think we’ve agreed to with other countries. And if the words don’t matter, then the whole enterprise fails.”

Tags
Climate Said She That Who

Leonid Meteor Shower: How and When to Watch It Peak

What to Know About the U.K. Budget Proposal