Throughout the pandemic, reporting assignments meant I was traveling more than most people. And when I was on the road, pandemic restrictions and just good sense meant that my meals came to be, by definition, takeout. 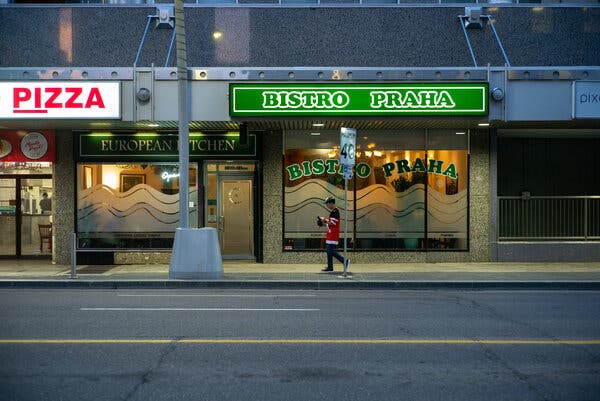 Edmonton’s Bistro Praha has long been a hangout for artists and performers.Credit…Ian Austen/The New York Times

While the pandemic is ongoing, I have gingerly started eating in restaurants again. And, in particular, I’ve resumed seeking out restaurants that are local institutions as much as they are places to grab a bite.

Most of them, perhaps all of them, will never attract the attention of critics from the Michelin Guide. Their décor is usually modest, as are their prices. But all have found a magic combination of distinctive food, great service and a friendly atmosphere that has given them longevity in a business known for short life spans.

A few years ago I wrote about a defining example: the Hoito, in Thunder Bay, Ontario.

[Read: Finnish Pancakes With a Side of Canada’s Labor History]

Late last year, however, a fire leveled the Finnish Labour Temple, which housed it. Rebuilding is now underway.

I’m currently in Edmonton, on my second trip here in only a few weeks. It’s a city that — before the pandemic, at least — I reported from fairly regularly. So I’m embarrassed to admit that it wasn’t until I came to cover Pope Francis’s visit late last month that I discovered one of its local institutions: Bistro Praha. It’s doubly embarrassing because Bistro Praha is close to both of the hotels where I usually stay in the city.

Its most recently opened location, just off Jasper Avenue, is not auspicious. It’s on the ground floor of an office block, wedged between a pizza place, a transit station entrance and a vacant storefront that housed a Starbucks before the pandemic.

The menu might be best described as middle European, with dishes like schnitzel, smoked pork shoulder and roast duck. Sauerkraut and dumplings also feature prominently. On the three times I’ve been there, many of the customers appeared to be regulars who knew each other. It was always busy.

At the end of a long shift waiting tables on Thursday night, Milan Svajgr, who now owns Bistro Praha with Alena Bacorsky, his partner in life and business, sat down with me to discuss its history.

Frantisek Cikanek, the founder, had no real restaurant experience when he started Bistro Praha in 1977. But he was dismayed to be unable to find in Edmonton the sort of cafe he had frequented in his native Czechoslovakia (as it was then known), so he opened one. Within a couple of years, it became a full restaurant, with pretty much the same menu that it has today.

Mr. Cikanek was involved in the city’s music scene, and, from the beginning, Bistro Praha has been a hangout for musicians, actors and artists. For most of its early years, it stayed open until 2 a.m. to accommodate their late hours. Mr. Svajgr said that once, when he was locking up, he was startled to see Joni Mitchell running toward the door; it was unlocked, and the restaurant remained open until 5 a.m.

That connection to celebrity has led to a curious practice at the restaurant: Starting with Kirk Douglas many years ago, celebrities from the arts and the sports worlds began autographing the undersides of its bentwood chairs. Ms. Mitchell’s sat near the front window the other night.

After Mr. Cikanek’s death, Mr. Svajgr and his sister, Sharka, who both began working at the bistro after emigrating from Czechoslovakia in the 1980s, purchased the restaurant from his estate.

There have been setbacks. Ms. Svajgr died in 2019, at the age of 53. Thirteen years ago, a fire in another business above the bistro’s original location forced it to close for two years before it moved to its current spot. However, Mr. Svajgr was able to salvage the furniture, including the autographed chairs. And a customer donated a second copy of the enormous photographic mural of a mountain scene that has dominated both locations. (It’s in Switzerland, not Central Europe.)

Like many restaurant owners, Mr. Svajgr exhausted his savings to keep the restaurant open during the pandemic. But he told me that he never considered quitting.

“It’s a lifestyle to be able to run this place,” he said with a laugh. “It is really interesting, I really like it. The restaurant business in general is not going to make you rich. You must love it.”

Does your community have a restaurant that’s a local institution? I’d like to hear about it both for my own travel planning and for a future newsletter. Please tell me about it by email and include your full name and where you live so that I can properly credit you, should we mention your favorite spot.

A native of Windsor, Ontario, Ian Austen was educated in Toronto, lives in Ottawa and has reported about Canada for The New York Times for the past 16 years. Follow him on Twitter at @ianrausten.

How are we doing?
We’re eager to have your thoughts about this newsletter and events in Canada in general. Please send them to nytcanada@nytimes.com.