About 15 years ago, I accompanied my mother during her first visit to the nonemergency wing of the Los Alamitos Medical Center in California. I was 14 at the time, obsessed with skateboarding. Mom, who has cerebral palsy, used a walker back then and decided to give the accessible entrance a try. It was a gently ascending switchback ramp, roughly 80 feet long. The ramp was ideal for wheelchair users, but its length and 180-degree turn made it difficult for my mother. She was winded by the time she got to the door and had to sit on a nearby bench to rest before continuing. Even on her best days, switchbacks exhausted her.

The next time we went, she tried the stairs — six brick steps accompanied by a handrail made of two parallel, varnished planks of wood. Mom navigated the stairs just fine, and as usual, I was right behind her. I might not have been able to break her fall, but it made us both feel better.

I remember the wooden handrail partly because it deviated from the standard circular metal bars. It’s possible that it met accessibility standards set out in the Americans With Disabilities Act of 1990, but even so, it was impractical for my mom. Accessibility is partly about meeting architectural code, but it involves so much more: individuals, their changing bodies, and multiple ways to get from here to there. 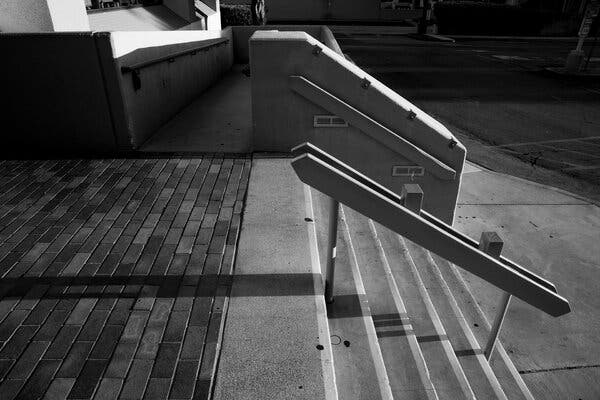 I also remember the handrail because I thought it might be the first one I’d grind on my skateboard. I would perform a jump, an “ollie,” and the bottom of my board would lock onto the rail, at which point I’d slide down and land safely on the concrete below. It was clearly doable: As I trailed my mom up the stairs, I saw the vibrant, technicolor streaks on the rail that indicated someone else had already tried.

I never did try that rail. The brick upper landing made for a bumpy, unpleasant run-up, and there was something about trying a dangerous trick at a hospital that felt a bit too on the nose. But those early trips with my mom made obvious for me something I’d always known implicitly: that both skateboarding and navigating daily life with a disability involve surprisingly similar ways of engaging with the built environment.

I had experiences like this with my dad, too, who also has cerebral palsy. When my parents divorced and he moved back to my grandparents’ house in East Long Beach, he and I would sometimes roll out to the nearby 7-Eleven together for a Slurpee — he in his push wheelchair and me a few paces ahead on my Zero brand skateboard. But roots from nearby trees were so strong and unruly that they frequently upended the sidewalk, creating massive cracks that even the biggest of wheels couldn’t glide over, and we’d have to detour to the street. It wasn’t all frustration, though: At the same house, the wooden ramp that my father used to pass over the three-stair entrance was also perfect for modest tricks, kickturns and kickflips. I’d gather some speed, roll up most of the ramp, and then flip my board counterclockwise, riding back down in the “fakie” stance. Thanks, Dad.

In her 2020 book, “What Can a Body Do?,” the artist and design researcher Sara Hendren convincingly argues that disability is fertile ground for creativity: Spaces that are inaccessible are indicative of failures in design rather than the human body, and those failures require creative solutions. It is an idea that is expressed daily by people like my parents.

Of course, central to all these activities are wheels and ramps. Ms. Hendren emphasized this point when, nearly a decade ago, she designed a ramp that could be used by either wheelchair users or skateboarders. In an interview in Psychology Today, Ms. Hendren explained that her goal was to create “a weird Venn diagram” between the skateboarding and wheelchair use “because people never think of those two things together.” The skaters, she explained, were seen as executing “this rebellious, athletically virtuosic thing,” while wheelchair users were seen as engaging in “a kind of sad version of not walking.” Her ramp was a way of saying they might be seen together — not as the same, but sharing the same pragmatic physics of the inclined plane.

The accessible entry ramp at the Medical Center.Credit…Nolan Trowe for The New York Times

When I traveled out with my parents and we encountered obstacles, we’d work together to find solutions. (Sometimes there was no solution.) Over the years, we bonded through this. I recently asked my mother whether she thought my skateboarder’s vision and her vision as a person with a disability had anything in common: “You could look at a staircase and say, ‘I can do this one,’ ” she said, “in the same way that I can look at something and tell you exactly whether I’m going to have trouble with it.” In time, navigating the world with my parents helped me grow as a thinker and problem-solver: I learned that sometimes the best solution is an imperfect one, and that few things matter more than the ability to think in the moment, to improvise.

The idea that skateboarding is a reinterpretation of urban space isn’t a new one. In “Skateboarding and the City: A Complete History,” the historian Iain Borden writes that skateboarders are “urban explorers” or “place hackers.” This idea of hacking, of using a landscape against the grain, resonates with how I navigated Southern California’s great swaths of suburban sprawl with my parents.

Indeed, who are the original urban guerrillas, if not people with disabilities? The first curb cuts — friends to users of all wheels — were created in Kalamazoo, Mich., in response to an influx of disabled veterans returning from World War II. In the 1960s and ’70s, the tireless work of disability activists led to curb cuts in Berkeley, Calif., and then thousands more in cities across the country. The list goes on: In myriad ways in the past 50 years, disabled citizens and activists have “hacked” the built environment — and the political system — to effect change, including the 1990 passage of the A.D.A., a law that The Times’s Michael Kimmelman wrote “has reshaped American architecture and the way designers and the public have come to think about civil rights and the built world.” That’s radical.

People with disabilities like my parents have become hackers out of necessity, forced to find innovative ways to thrive in a world constructed for the non-disabled. At my mom’s local accessible gym, a bungee cord was attached to the ceiling, allowing her to walk on a treadmill with less resistance — a sort of do-it-yourself antigravity treadmill, as it were. To reach the remote that controls her van’s wheelchair lift without getting out, my mom has tied the control around the skinny metal pole of the driver seat’s headrest. Daily hacks like this may seem small, but they reflect the daily ingenuity of the larger disabled community.

As I’ve gotten older, my parents have become more candid with me about their impairment and the needs that accompany it. Part of this is out of necessity. Though cerebral palsy is not medically progressive, many experts argue that it is functionally so; symptoms start changing in early adulthood.

The author’s parents, Lisa and Steve Klemin.Credit…Nolan Trowe for The New York Times

I recently asked my parents if they’d take a magic pill that would make their impairments disappear. They both said yes. But as we continued to talk, each of them had trouble imagining how a life without cerebral palsy would have played out. My mother’s decision to become a speech therapist was a direct result of the hundreds of hours she spent as a child in physical therapy, while my dad worked for a nonprofit independent living center for most of his professional life.

I’ve also tried to imagine who I would be with non-disabled parents. As a skateboarder I probably would have been less skittish, less aware at all times of the consequences of a hard fall. On the other hand, I probably would have been less skilled at appraising a skateboarding spot’s potential, at being able to tell, at a glance, if a pavement’s texture would render a staircase unskateable.

It is seldom that a child must confront and think deeply about the built environment, but I did so daily as both skateboarder and son. It was as if there was a switch in my brain that regulated how I saw the world: It was off when I walked around alone, and it was on when I was out in the world with my parents. It was only when I visited that medical center with my mom that I realized the switch was the same one I flipped on whenever I stepped on my skateboard.

In their book, “Making Disability Modern,” Elizabeth Guffey and Bess Williamson write that disability is “an origin-point for design knowledge and creativity.” That’s what those brick stairs with the wooden rail were, then. A barrier, but also a beginning.

Jeremy Klemin is a writer and literary translator from Southern California. He is working on a collection of essays about his parents, skateboarding and built environments.

Do Not Bring Your ‘Whole Self’ to Work