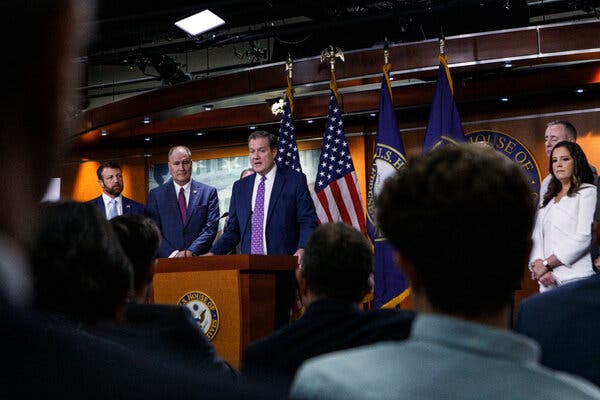 A news conference held by Republican members of the House Intelligence Committee to discuss the F.B.I. raid.Credit…Anna Rose Layden for The New York Times

Division in the Republican Party

As Republicans continued to defend Donald Trump after an unprecedented F.B.I. search of the former president’s residence in Florida, deep fissures were visible in the party’s support for law enforcement. While some congressional Republicans attacked the F.B.I. and other top law enforcement agencies, others chastised their colleagues and were more restrained in their criticism.

On Friday, a federal judge unsealed the warrant authorizing the search and an inventory of items removed from Trump’s property by federal agents. The list showed that the F.B.I. had retrieved 11 sets of classified documents as part of an inquiry into potential violations of the Espionage Act and two other laws.

Many Republicans have called for the release of the affidavit supporting the search warrant, which would reveal what had persuaded a judge that there was probable cause to believe a search would find evidence of crimes. Such documents are typically not made public before charges are filed.

Threats: A gunman on Thursday attacked an F.B.I. office in Cincinnati, and on Friday the Homeland Security Department warned of “an increase in threats and acts of violence” against law enforcement, “including a threat to place a so-called dirty bomb in front of F.B.I. headquarters and issuing general calls for ‘civil war’ and ‘armed rebellion.’”

For more: Trump claims he had declassified the top-secret files that the F.B.I. seized at his Florida residence. Here’s what makes that legally irrelevant.

The author Salman Rushdie, who was stabbed roughly 10 times on Friday, has been removed from a ventilator and is on the mend, his agent, Andrew Wylie, said yesterday. “The road to recovery has begun,” he said. “It will be long; the injuries are severe, but his condition is headed in the right direction.”

Rushdie was attacked onstage minutes before he was to give a talk in western New York. Hadi Matar, a 24-year-old man from New Jersey, was arrested at the scene and charged with second-degree attempted murder and assault with a weapon. He has pleaded not guilty to the charges.

Rushdie was put on a ventilator on Friday evening after undergoing hours of surgery at a hospital in Erie, Pa. In a statement, his son Zafar Rushdie said the author was receiving extensive treatment. “Though his life-changing injuries are severe, his usual feisty and defiant sense of humor remains intact,” he said.

Background: Rushdie’s 1989 novel, “The Satanic Verses,” fictionalizes parts of the life of the Prophet Muhammad with depictions that offended some Muslims. Ayatollah Ruhollah Khomeini, who led Iran after its 1979 revolution, issued an edict known as a fatwa on Feb. 14, 1989, ordering Muslims to kill Rushdie, who went into hiding for years.

The Zaporizhzhia nuclear power plant, on the Dnipro River.Credit…David Guttenfelder for The New York Times

The main front in Russia’s military onslaught on Ukraine appears to have shifted dangerously to the south, risking a catastrophe at the Zaporizhzhia nuclear station, Europe’s largest nuclear power plant.

Over the weekend, Russia used territory around the nuclear power station, which it seized from Ukraine in March, as a staging ground for attacks on Ukrainian positions. It unleashed a barrage of howitzer fire on the nearby Ukrainian-held town of Nikopol, local officials said. The intensifying battles near the plant, which is about 60 miles from the Russian-occupied city of Kherson, have sent residents fleeing and raised alarm about potential dangers from radiation far beyond Ukraine.

Russian troops in Kherson have been largely cut off from their main source of supplies since Ukraine wrecked the last of four bridges across the Dnipro River. Some reports said Russian commanders had already left the city, but sources in the Ukrainian military said they had seen no evidence of a retreat.

Risks: Engineers at the nuclear power plant say that yard-thick reinforced concrete containment structures protect the reactors, even from direct hits. International concern, however, has grown that shelling could cause a fire or other damage that could lead to a nuclear accident.

The superstorm that Californians have long feared will very likely take shape one winter in the Pacific, near Hawaii. No one knows exactly when, but from the vast expanse of tropical air around the Equator, atmospheric currents will pluck out a long tendril of water vapor and funnel it toward the West Coast.

“We got kind of lucky to avoid it in the 20th century,” said one climate scientist. “I would be very surprised to avoid it occurring in the 21st.”

When the B-52’s played their first gig in 1977, the self-described “freaks” from Athens, Ga., couldn’t imagine that they would someday be rock stars. “It was a hobby,” the singer Fred Schneider said. “We’d jammed once or twice. We didn’t even have the money to buy guitar strings.”

But the B-52’s had an undeniable appeal — sharp guitars, shouted choruses, campy wigs — that transformed them from a cult band to one with multiple Top 10 hits, most memorably the 1989 song “Love Shack.”

Now, after more than four decades, the B-52’s have announced that their upcoming tour will be their last. They recently spoke with The Times for a Q. and A., during which they looked back on the band’s career.

For more: This interactive feature shows the bands that influenced, and were influenced by, the first B-52’s album.

Start your week right with this green quinoa pilaf.

In her new novel, “Complicit,” Winnie M Li explores the collateral damage of assault on both victims and witnesses.

“The Princess” is an unsparing look at Princess Diana using only archival footage.

And here’s today’s Wordle and the Spelling Bee.

The latest episode of “The Daily” checks back in with twins who were choosing between the Boy Scouts and the Girl Scouts.

The Endless Fascination With Mike Tyson

Reckoning With Memories of Budapest