Now Lives: In a two-bedroom apartment in Downtown Los Angeles.

Claim to Fame: HoneyLuv (whose legal name is Taylor Character) is a house D.J. and producer who is part of a new generation of Black artists shaping dance music — blending R&B, Reggaeton, Afrobeats, house and techno into her signature sound. She has toured with Kaytranada, MK, Kevin Saunderson and other electronic music artists, and has remixed songs for Diplo and Annie Mac. Her vision, she said, is “to provide music that empowers people to be who they want to be and to be free on that dance floor with no worries of tomorrow.”

Big Break: In 2018, while serving as a drone operator in the Navy to pay for college, HoneyLuv taught herself to D.J. while stationed at Point Mugu near Malibu, Calif.She decided to pursue D.J.-ing when she left the military last year, and booked her own gig at the Flamingo Deck, a popular restaurant and lounge in San Diego. Her set of “funky deep grooves,” she said, caught the attention of a patron, Hamilton Wright, who happened to be a former agent at the United Talent Agency who represented D.J.s. With his help, she played the following week at the Day Trip Festival, a two-day house music gathering in Los Angeles. 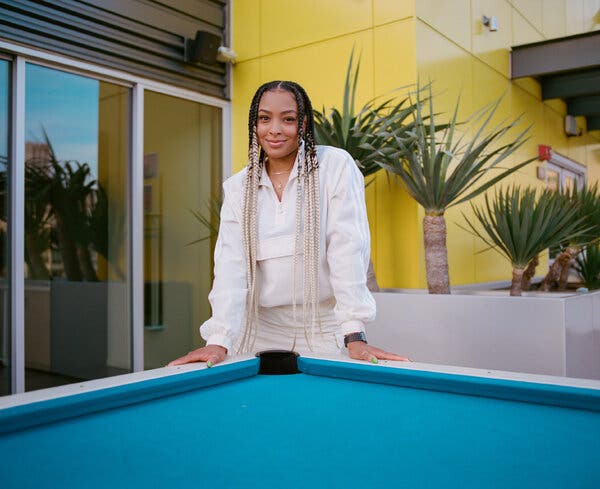 Her latest tech-house single, “Thr33 6ix 5ive,” has been streamed more than five million times on Spotify.Credit…Maiwenn Raoult for The New York Times

Latest Project: In July, HoneyLuv released her latest single “Thr33 6ix 5ive,” an up-tempo tech-house track on Black Book Records that has been streamed more than five million times on Spotify and was chosen as a BBC “Hottest Record.” HoneyLuv is also passionate about fashion and was tapped last month to be a brand ambassador for Armani Exchange. “I expect a runway one day,” she said. “They always have artists and actors doing it, so I believe D.J.s can do it, too.”

Next Thing: HoneyLuv is set to release a ’90s-style house remix of Lizzo’s “Everybody’s Gay” soon. Describing it as “an honor,” she said, “I’m a huge Lizzo fan, just for what she stands for,.” She is also releasing at leasttwo singlesin the coming months, including “Sway,” a house track featuring Dope Earth Alien on Insomniac Records, and hopes to collaborate with house music pioneers Harry Romero and Roland Clark next year.

Diversity in Dance: When HoneyLuv performed at the Electric Daisy Carnival in Las Vegas last year, she was the only Black female artist on the lineup. There have been very few in recent years and she is pushing for more inclusivity. “This music started with us, and to have a new generation of young, Black artists like myself finding their love for house music and wanting to put our mark on it has been such a beautiful experience,” she said. “It’s up to us to continue the legacy in hopes we can inspire more and more people to join this community and enjoy the music.”

Tags
Artist House Music She With

How Do Designers Decorate for the Holidays? We Invited Ourselves Over to See.

A Murder Mystery With Clothes to Die For

Gucci Picks Sabato De Sarno as Its Next Creative Director

The Hottest Song at the Club? ‘The White Lotus’ Dance Remix