Some of the most conspicuously privileged people in America, dressed in gowns and tuxedos, wrapped in diamonds, were sipping passion fruit margaritas garnished with skinny jalapeño slices as they considered bidding on items like a nine-session facial, known as the beauty sandwich, with a value of $20,000, if you can get an appointment.

It was last Saturday evening and the gala for Baby2Baby, a Los Angeles-based national charity that supplies children and families living in poverty with essential items like diapers, formula, blankets and cribs, was just getting started at the Pacific Design Center, a design industry showroom and event space.

Norah Weinstein and Kelly Sawyer Patricof, the chief executive officers of Baby2Baby, have hosted the event every year since 2012 (except for 2020). It has emerged as a smaller-scale, West Coast version of the Robin Hood Foundation gala, made famous for the A-list Wall Street types and celebrities who attend, the marquee musical guests who perform and the millions of dollars raised for the cause. (At its May 2022 gala, Robin Hood raised $126 million to fight poverty in New York City.)

Whereas Robin Hood was founded in 1988 by male hedge fund magnates, Baby2Baby draws its cash and cachet from the social media savvy of its most ardent supporters — wealthy entrepreneurial women with large Instagram followings — and the sponsors that love (being tagged by) them.

“This is mom prom,” said Molly Sims, a Baby2Baby supporter.

There were Ciara, Kelly Rowland, Kerry Washington, Vanessa Bryant and Kris Jenner, with her beau, Corey Gamble, and two of her daughters, Kylie Jenner and Kim Kardashian. (Iván Pol, the aesthetician who performs the sandwich facial, shared on Instagram that he had sandwiched Ms. Kardashian’s face that very day.)

Ms. Kardashian appeared without a date but with a bodyguard. Alas, there would be no interviews. 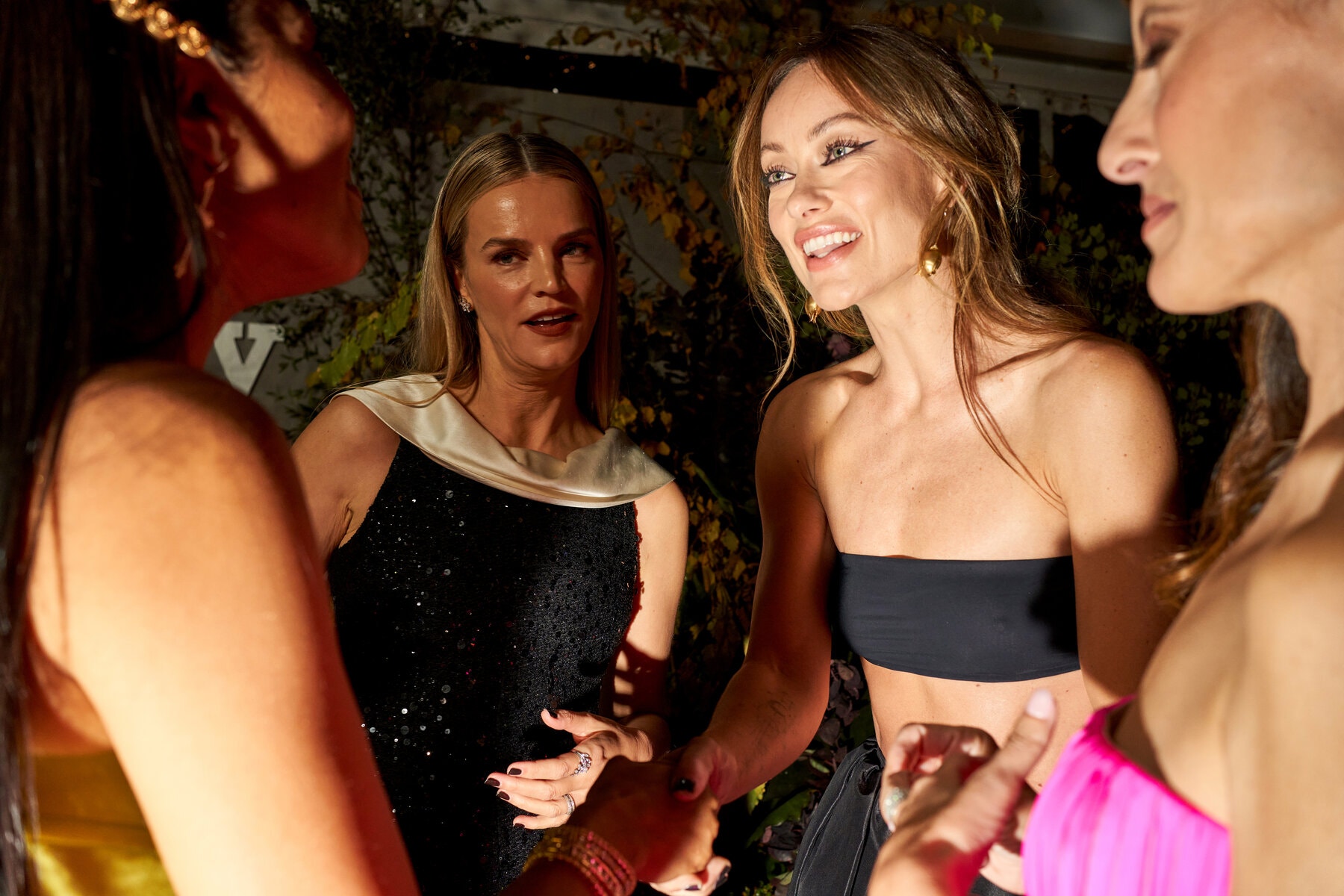 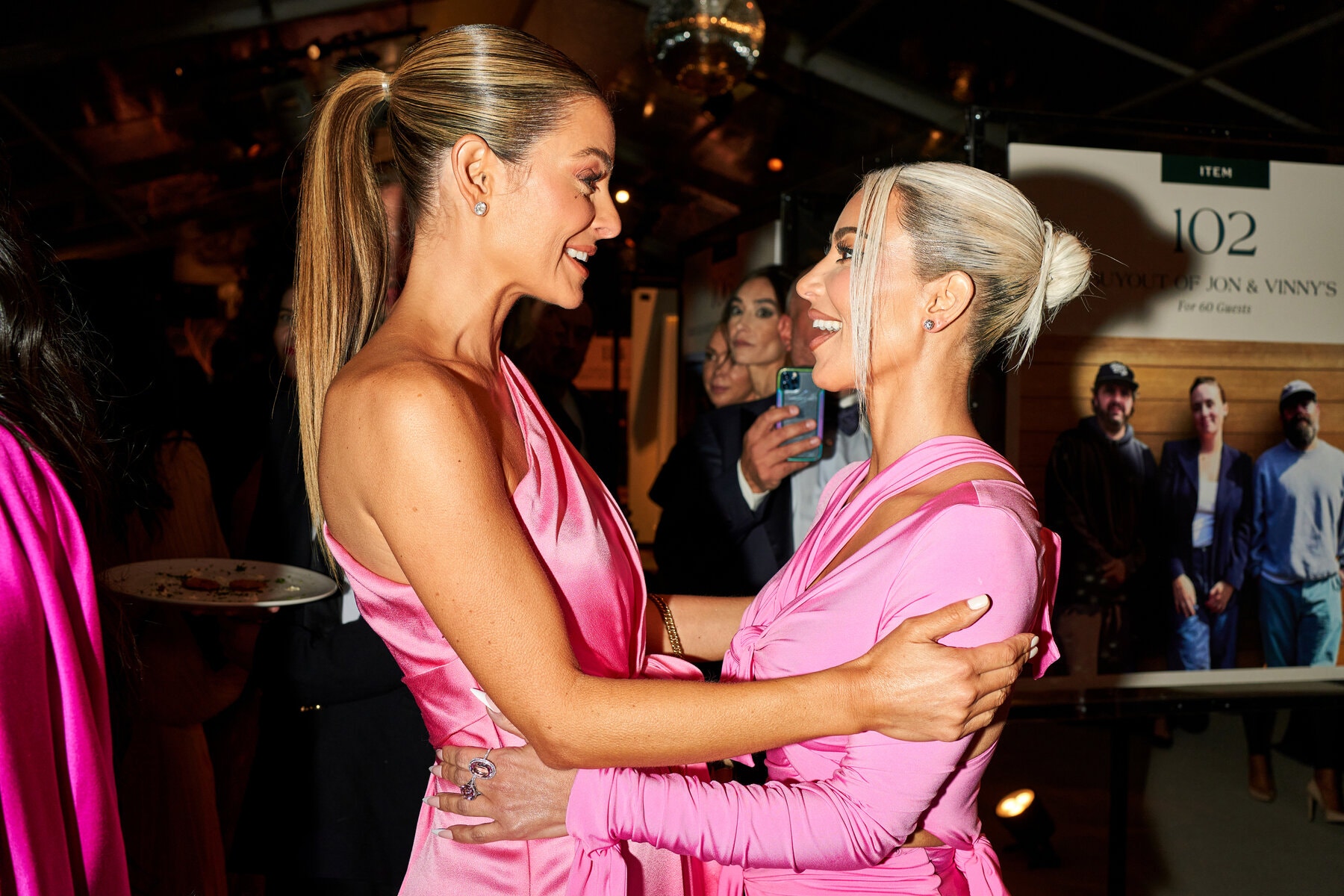 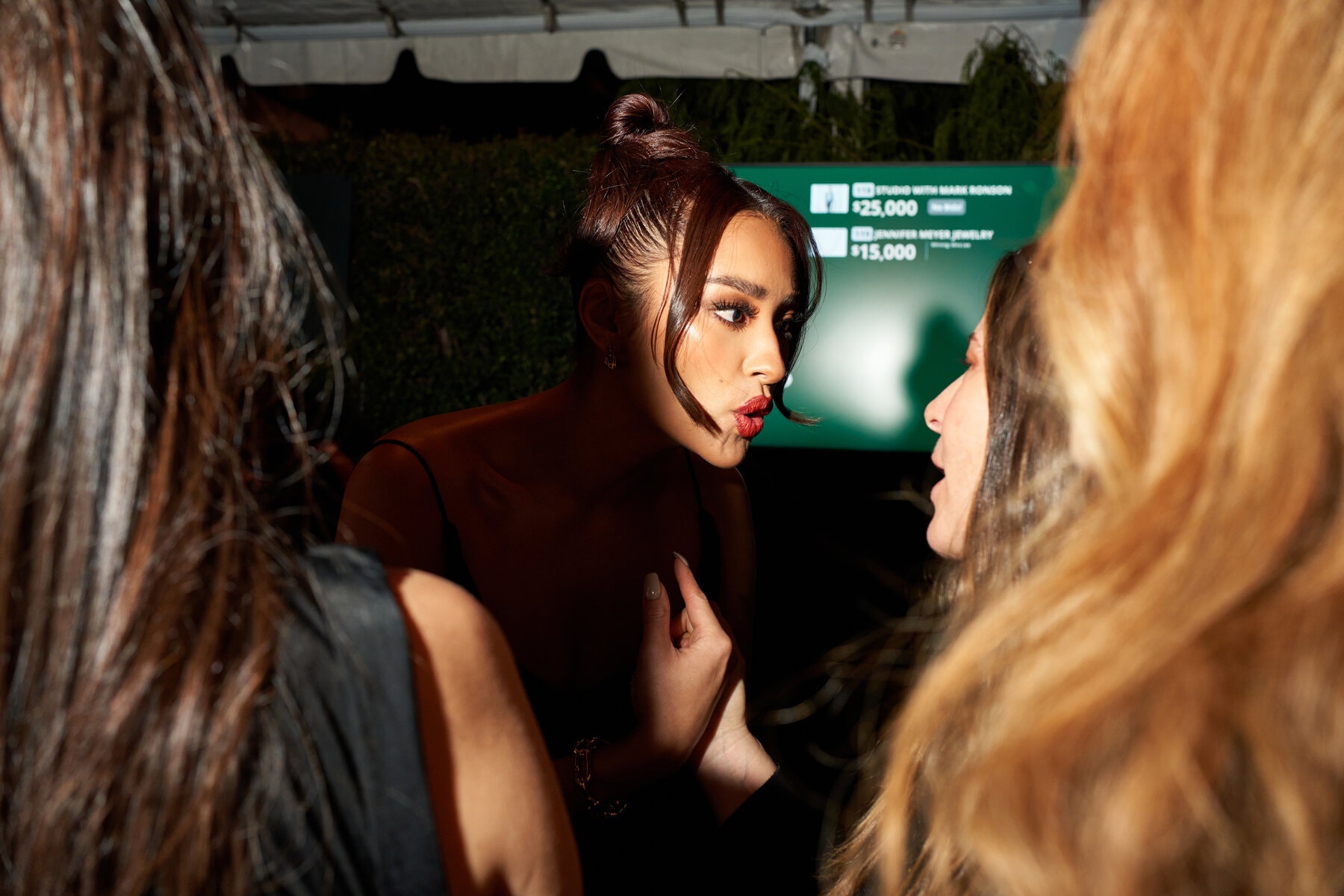 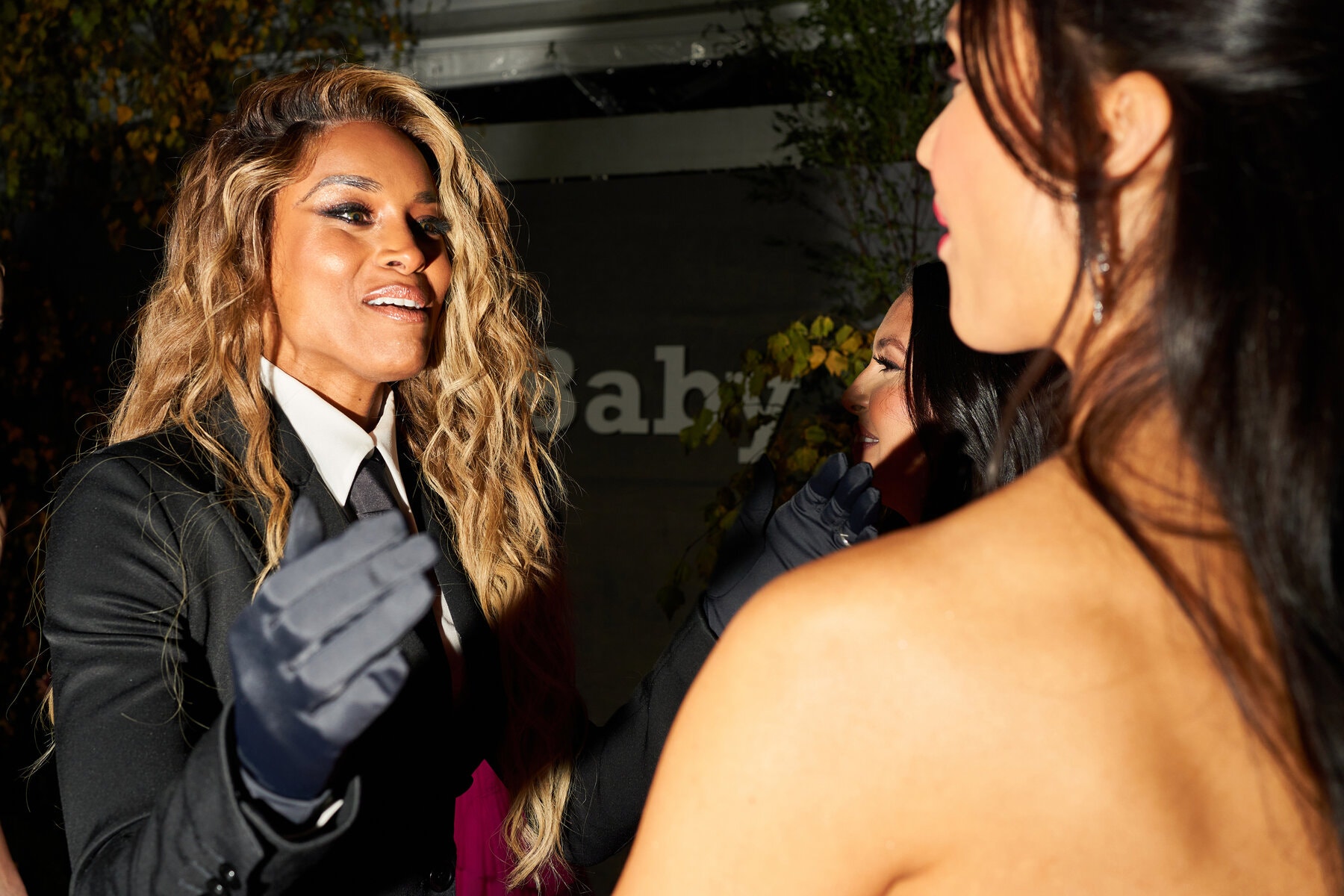 As guests poured into the cocktail reception area, lit dimly and decorated with greenery, Ms. Weinstein and Ms. Patricof posed in various formations with guests, of which there were about 800.

“This is work,” said Ms. Weinstein, a former lawyer. The air kisses and dresses were mere window-dressing for the night’s purpose — to raise $10 million, which would amount to 70 percent of the organization’s operating budget for the year ahead.

The women’s husbands — Brian Weinstein, a Hollywood executive, and Jamie Patricof, a film producer and Democratic fund-raiser — provided backup, glad-handing in the shadows of the photo lighting that bathed their wives.

Ms. Patricof, 47, and Ms. Weinstein, 46, have been running Baby2Baby since 2011. During the pandemic, when the scarcity of essential goods like baby formula became national news, Baby2Baby was a go-to source for local, state and federal agencies that were seeking to provide supplies. In the past year, the charity helpedaccess 4.1 million bottles of formula amid the supply shortage. The women and the organization has also lobbied for the removal of sales tax from diapers. Their efforts have succeeded in California and Florida. 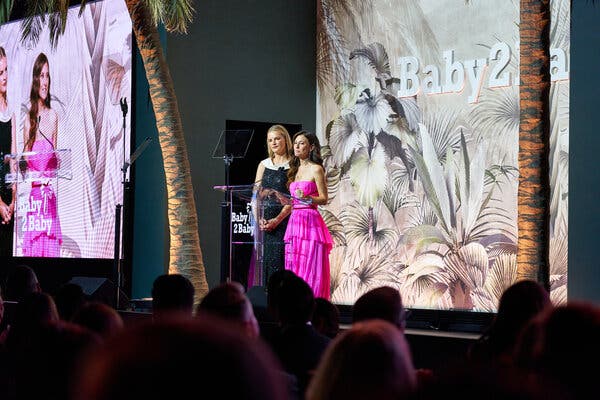 Ms. Patricof and Ms. Weinstein, the chief executive officers of Baby2Baby, which has distributed 130 million diapers since 2011.Credit…Michelle Groskopf for The New York Times

Ms. Alba, a close friend of Ms. Patricof’s, has been involved with the charity for years. “Our husbands made us hang out when we were both pregnant,” Ms. Alba said. “I thought, ‘I’m not going to be friends with this girl who doesn’t even look pregnant.’ I was a house! But I loved her. She taught me how to be a cool mom.”

Ms. Alba taught Ms. Patricof to think like a mogul, as she herself was building The Honest Company, her beauty and baby product company.

Ms. Alba said she told Ms. Patricof that Baby2Baby “should be the No. 1 diaper bank in L.A., we should scale this.” She was honored by Baby2Baby in 2012 at its first gala. “Kelly is the very best at networking, and Norah is incredibly organized and the lawyer we all need to run everything.”

Ms. Alba then spotted a profusion of pink that she wished to join: Ms. Bryant and Ms. Weinstein, both in hot pink, were posing for photos with Ms. Kardashian, in a bright pink dress with bows. Ms. Alba glided over to get into the frame.

The gala provides a marketing opportunity for Baby2Baby, to make its case to new supporters. For Alex Cooper, the host of the podcast “Call Her Daddy,” it was her first time attending, and she had come to learn. “My listeners are often persuaded by me, and it’s important that I know what I’m talking about,” she said.

Robert Denning, the founder of the sunglasses brand Westward Leaning, stood with a cocktail in hand, taking in the scene with Charles Porch, the vice president of global partnerships for Instagram. Mr. Porch and his team work with influencers in the realms of entertainment, music, sports and more.

“This has the highest concentration of celebrities per capita of any party outside of Oscar Night,” Mr. Denning said.

“No one says no to Baby2Baby,” Mr. Porch said. (They had flown in from New York to show their support.)

The 800 guests were urged to donate all they could. “We saw you at Cannes; we saw you at Venice. We know you’re doing well,” Mindy Kaling, the M.C., told them.Credit…Michelle Groskopf for The New York Times

When Ms. Patricof and Ms. Weinstein first imagined a gala in 2011, they knew they didn’t want a hotel-ballroom, chicken-dinner affair. Each year they turn to Jon Shook and Vinny Dotolo, famous among restaurant-goers in Los Angeles for the Jon and Vinny’s eateries, to pick a handful of chefs to cook signature dishes. This year that included chicken black mole tamales, pulled pork sliders and goat cheese focaccia pizzas.

Women may have dominated the gala, but they were underrepresented near the food stations. Colton Underwood, the star of “The Bachelor” in 2019, stood in a burnt orange suit and sneakers, waiting for a bite. This was his second year attending the gala.

“The cherry on top is you get to catch up with people you otherwise just see quickly on carpets,” he said.

Max Greenfield, a star of the CBS sitcom “The Neighborhood” and Fox’s “New Girl,” was holding court in a tuxedo, no tie. Why does he support Baby2Baby? “They really do it right,” he said. What’s he eating? “Much better question,” he said. “I always go Kogi,” referring to the Korean short rib tacos.

As the guests settled at their tables with their little plates of food, the actress and writer Mindy Kaling appeared on the stage with teleprompters in front of a huge Baby2Baby screen. She introduced herself as the M.C. and said that if last year’s M.C., James Corden, had been able to attend, he surely would have offered thanks to guests, in addition to “a few notes on the food preparation.” This got a big laugh.

She continued: “There are more insane rich people here than in a season of ‘White Lotus.’ My favorite thing about this event is the juxtaposition between the amazing work that this organization does and the fact that we’re all really fancy L.A. people. Like, if everyone here donated half of what they spent on the glam tonight, we’re really going to make a difference.” This drew fewer laughs.

Ms. Patricof and Ms. Weinstein took the stage and underlined the accomplishments of Baby2Baby.

During the formula shortage, the charity negotiated with small manufacturers and international companies, which it had relationships with, to help get formula to babies in small towns and cities, from Los Angeles to Pittsburgh.

Mom’s Night Out: Kris Jenner poses with other Baby2Baby guests. From left, Brandy Ledford and Eloise DeJoria.Credit…Michelle Groskopf for The New York Times

“We saw you at Cannes; we saw you at Venice,” Ms. Kaling said. “We know you’re doing well.”

“Can anyone here give a million dollars?” Ms. Deschanel asked.

(Mr. Hess is the grandson of Leon Hess, the founder of the Hess Oil and Chemical Corporation and a one-time New York Jets owner. Ms. Hess is also known as Misha Nonoo, the fashion designer.)

“You don’t even want to get recognized?” Ms. Deschanel said. “That’s very un-Hollywood.”

They continued as guests offered $100,000 and $50,000. As the auction wrapped, Ms. Kardashian and her Skims co-founders Emma Grede and Jens Grede donated $1 million, bringing the total for the night to more than $10 million.

“You don’t have to break the internet or have millions of followers to make a difference,” she said. (But it helps.)

The festivities wrapped up when Sean Combs, who currently goes by the name Diddy, took to the stage and performed songs including “It’s All About the Benjamins.” Hundreds of well-toned arms pumped in the air.

It was then that one of the most important activities of the night began: the posting of the photos on Instagram.

Mo Money: After Kim Kardashian, Emma Grede and Jens Grede donated $1 million, Sean Combs, known as Diddy, performed hits including, “Been Around the World.”Credit…Michelle Groskopf for The New York Times
Tags
Said That This Was With

A Cinematic Los Angeles Apartment With Nods to David Bowie

How Much Would You Pay for Steve Jobs’s Birkenstocks?

What Is the Ideal Pair of Black Pants?

Greta Gerwig, in the Pink