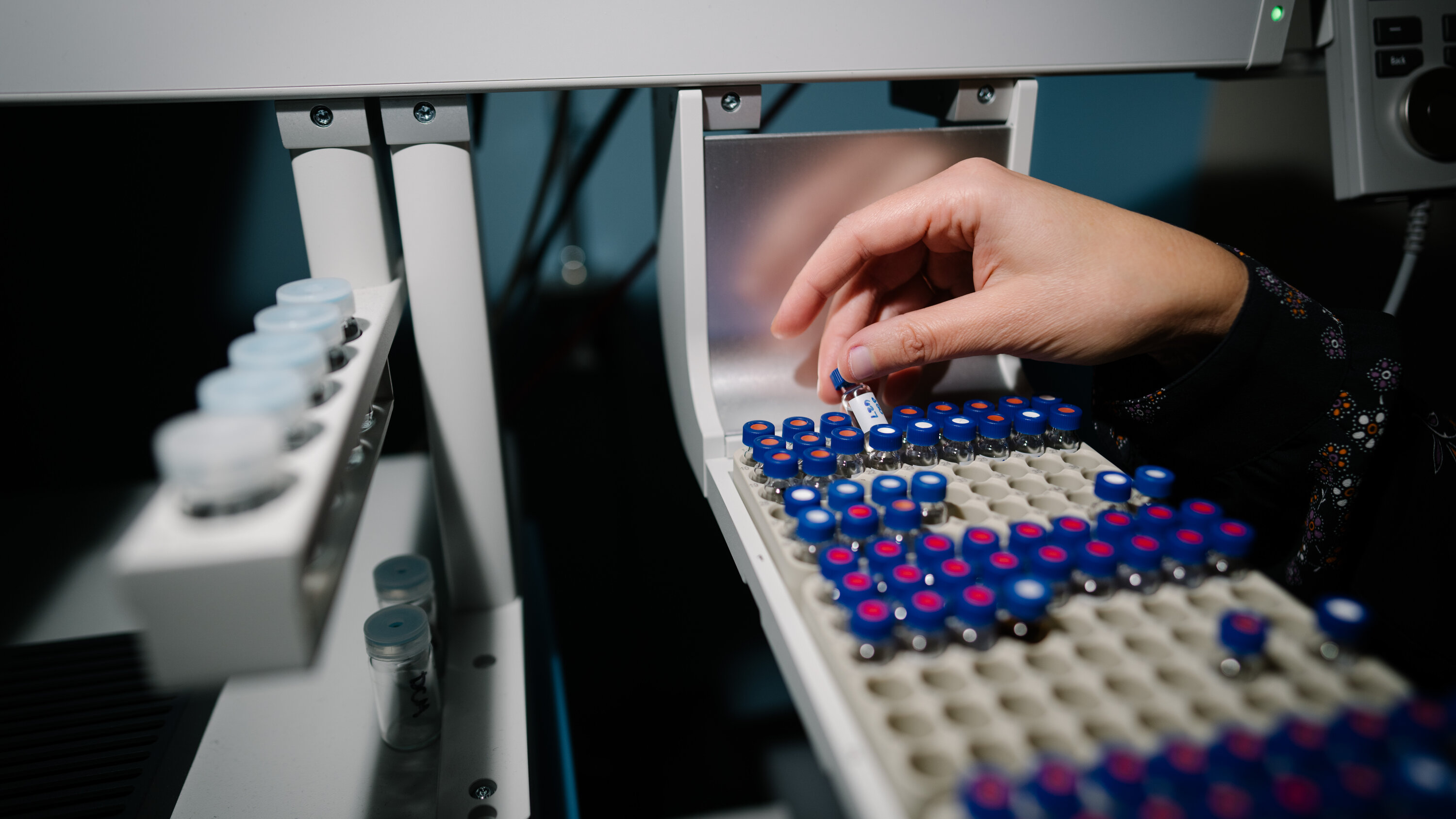 CHAPEL HILL, N.C. — The white powder, deposited in a small tube, arrived one morning by FedEx in a basement office on the campus of the University of North Carolina at Chapel Hill.

“Quick OD, half bag, weirdly lethargic after,” the anonymous drug user from Wilmington, N.C., wrote on a slip of paper the size of an index card, which came with the tube. The user had a hunch that there was fentanyl in the powder but feared the presence of xylazine, a dangerous animal tranquilizer that can leave oozing wounds on limbs.

Erin Tracy, a chemist at the university who specializes in testing drugs, began searching for the answer. She dispensed the sample into a small vial, then loaded it into a $600,000 refrigerator-size device known as a gas chromatograph-mass spectrometer, which is commonly used in academic chemistry laboratories. A nearby computer displayed the results in a line graph with a dramatic peak — the signal for fentanyl.

There was only a trace of xylazine, the machine confirmed. In a state increasingly besieged by the drug in the street supply, the results from the test, conducted in September, amounted to a partial relief.

The work at the North Carolina lab is part of a strategy known as harm reduction, which aims not to lead users to abstinence but to give them the tools to use drugs safely, keeping them from infections, injuries and death. President Biden is the first president to endorse the strategy, lending it a federal imprimatur that health experts say could transform how the United States contends with drug use.

The testing of drug samples at the lab and in a growing number of cities across the country is delivering new insight to researchers and drug users about what is in the local drug supply. Drug users can learn what is in a substance before they use it, alert other users to possible dangers in the supply or find out why a drug led to an overdose or some other reaction. The Chapel Hill team has also examined samples of drugs that caused fatal overdoses and then relayed the results to harm reduction groups.

The testing work in North Carolina and elsewhere, known as drug checking, has become especially critical to recognizing fentanyl, a synthetic opioid and a chief culprit in many overdose deaths in recent years. Other drugs, such as cocaine and heroin, are often mixed with fentanyl. 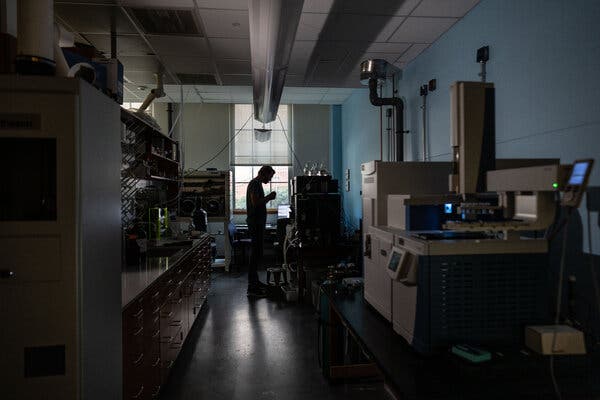 But the U.S. drug supply is increasingly being contaminated by other substances as well, such as xylazine. The volatile and expanding medley has intensified calls from public health experts and some federal officials to invest in more sophisticated forms of drug checking.

Fentanyl Overdoses: What to Know

Devastating losses. Drug overdose deaths, largely caused by the synthetic opioid drug fentanyl, reached record highs in the United States in 2021. Here’s what you should know to keep your loved ones safe:

Understand fentanyl’s effects. Fentanyl is a potent and fast-acting drug, two qualities that also make it highly addictive. A small quantity goes a long way, so it’s easy to suffer an overdose. With fentanyl, there is only a short window of time to intervene and save a person’s life during an overdose.

Stick to licensed pharmacies. Prescription drugs sold online or by unlicensed dealers marketed as OxyContin, Vicodin and Xanax are often laced with fentanyl. Only take pills that were prescribed by your doctor and came from a licensed pharmacy.

Talk to your loved ones. The best way to prevent fentanyl use is to educate your loved ones, including teens, about it. Explain what fentanyl is and that it can be found in pills bought online or from friends. Aim to establish an ongoing dialogue in short spurts rather than one long, formal conversation.

Learn how to spot an overdose. When someone overdoses from fentanyl, breathing slows and their skin often turns a bluish hue. If you think someone is overdosing, call 911 right away. If you’re concerned that a loved one could be exposed to fentanyl, you may want to buy naloxone, a medicine that can rapidly reverse an opioid overdose and is often available at local pharmacies without prescription.

“We need to understand that, and we need technology that can give you the information,” she said.

Drug policy experts say that while the exact number is difficult to determine, there are dozens of health departments, academic laboratories or harm reduction groups using machines for drug checking around the country, including in cities such as New York and Chicago. But the work needs more funding, experts say, in part because of how difficult it is to scale. While test strips that can check for the presence of fentanyl in a sample typically cost $1, drug checking machineshave a price tag in the tens or even hundreds of thousands of dollars.

The Biden administration’s 2022 national drug strategy aims to increase drug checking services at harm reduction programs by 25 percent within three years, a feat that policy experts say will require more funds to be directed to groups that typically operate on shoestring budgets.

Drug checking has long been a feature of harm reduction efforts in Canada, Australia and Europe, including in social settings such as nightclubs and music festivals. But the practice has picked up in the United States only in recent years, a reflection of the nation’s slow adoption of harm reduction measures. In more than a dozen states, even the basic tools of drug checking, such as fentanyl test strips, are outlawed as drug paraphernalia; conservatives criticize the practice as permissive of drug use.

As the opioid supply has surged in recent decades, drug checking has typically been conducted by crime laboratories or the Drug Enforcement Administration, which examine the contents of drug seizures. Law enforcement agencies have long been hesitant to share the results quickly or publicly for the purposes of helping drug users know more about the local supply. 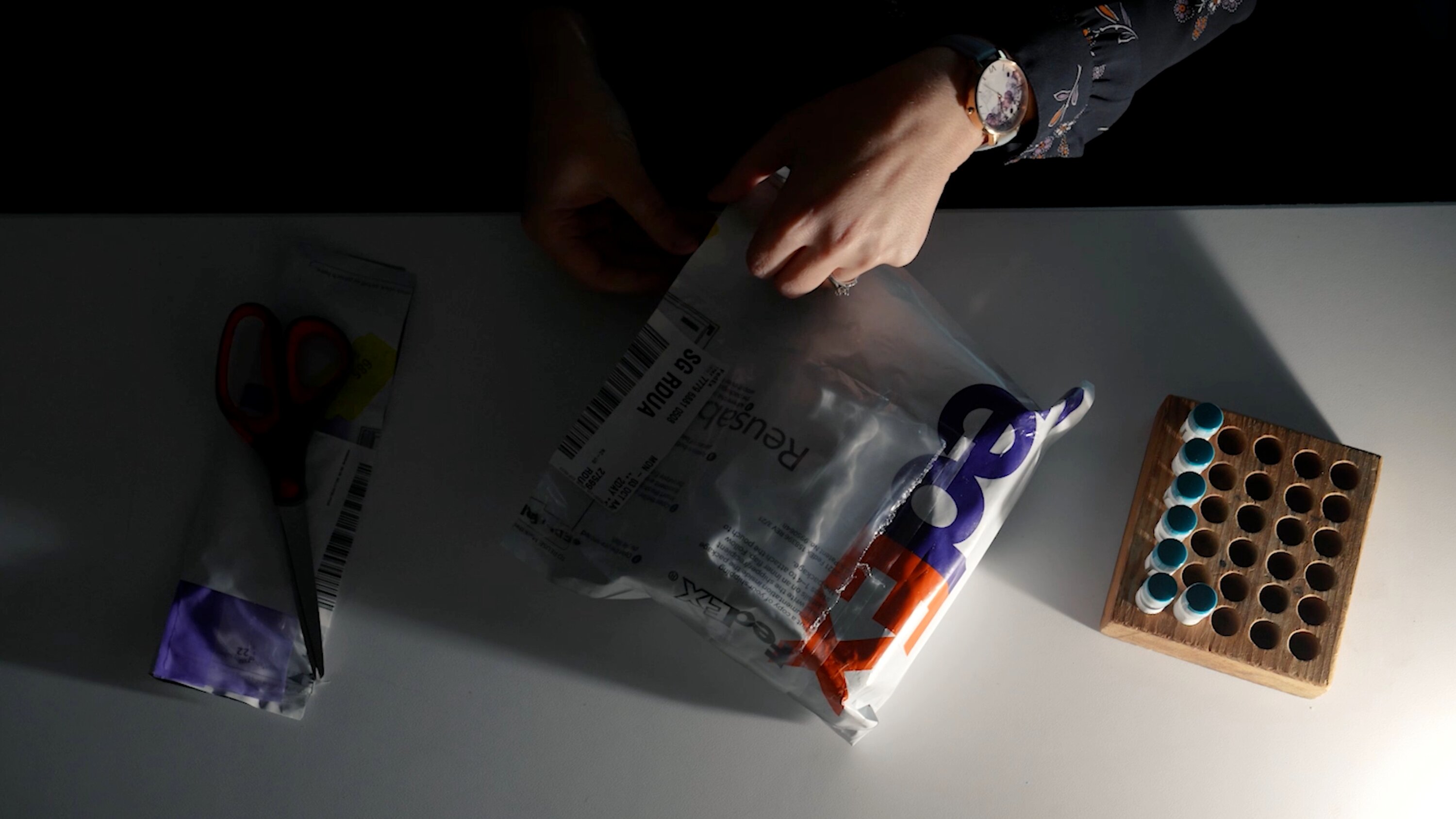 Users are often left to intuit what they take based on a pill or powder’s smell or appearance, such as its lightness or darkness. Samples from the same drug dealer can contain different amounts of fentanyl, with other substances mixed in that might vary from dose to dose. And the effects of drugs can differ from batch to batch, which can have trace amounts of substances that sometimes cause odd and surprising sensations.

Drug checking tools are needed in part, experts say, because of the limited value of fentanyl test strips — one of the core components of the Biden administration’s drug control strategy. Unlike some drug checking machines, the strips do not tell a user the variety or amount of fentanyl in a sample — only whether it contains the drug. And because fentanyl is so widespread, users often ingest substances knowing they contain the drug.

Some harm reduction groups now have cheaper, toaster-size machines that conduct less comprehensive checks than the Chapel Hill device but are highly portable. Those machines allow health workers in cities like New York, Chicago, San Francisco and Boston to test drug samples out of vans or small rooms, with results reported back to users in minutes.

“We have regulars that come back week after week, folks that get a supply and don’t want to use it until they come to the drug testing service,” said Ro Giuliano, who directs syringe exchange programs at the San Francisco AIDS Foundation, which checks drugs using the smaller machines.

The Chapel Hill team has developed what some drug policy experts see as the most ambitious model. Its mail-in program, which began last year, allows the work to stretch beyond a single organization or community, including to states where drug checking might be considered illegal.

The program does not know the identities of the users who submit drugs for testing; the samples are typically routed through harm reduction organizations, which have relationships with the drug users and can communicate results to them. The results are also posted online. The researchers have so far tested drugs from 18 states and 51 clinics and programs.

From powerful pharmaceuticals to illegally made synthetics, opioids are fueling a deadly drug crisis in America.

To collect samples, the Chapel Hill team provides drug users with kits that include a small vial with a chemical solution that effectively neutralizes the substance. Nabarun Dasgupta, the scientist who oversees the program, said that step helps to fend off possible skepticism about the legality of the work.

Drug checking has already benefited users in states with drug paraphernalia laws that make it more difficult to test drugs, said Aaron Ferguson, a leader of the Urban Survivors Union, a group that represents harm reduction organizations and drug users. In recent months, he has gathered dozens of heroin samples from cities in Texas, where drug checking tools are outlawed, to send to Dr. Dasgupta’s team, suspecting they contain fentanyl.

Tools for drug checking “create an early warning system that simply is never going to happen from D.E.A. drug seizures in a criminalized drug supply,” Mr. Ferguson said. “Even the people dealing the drugs don’t know what’s in them in most instances.”

Among the roughly 600 samples the group has run so far, Dr. Dasgupta and his team have found over 100 substances. Only a small number were what he referred to as the “intended” drugs, such as THC, cocaine, heroin, ketamine, MDMA and methamphetamine. Many samples have contained dizzying combinations of a dozen or more substances. 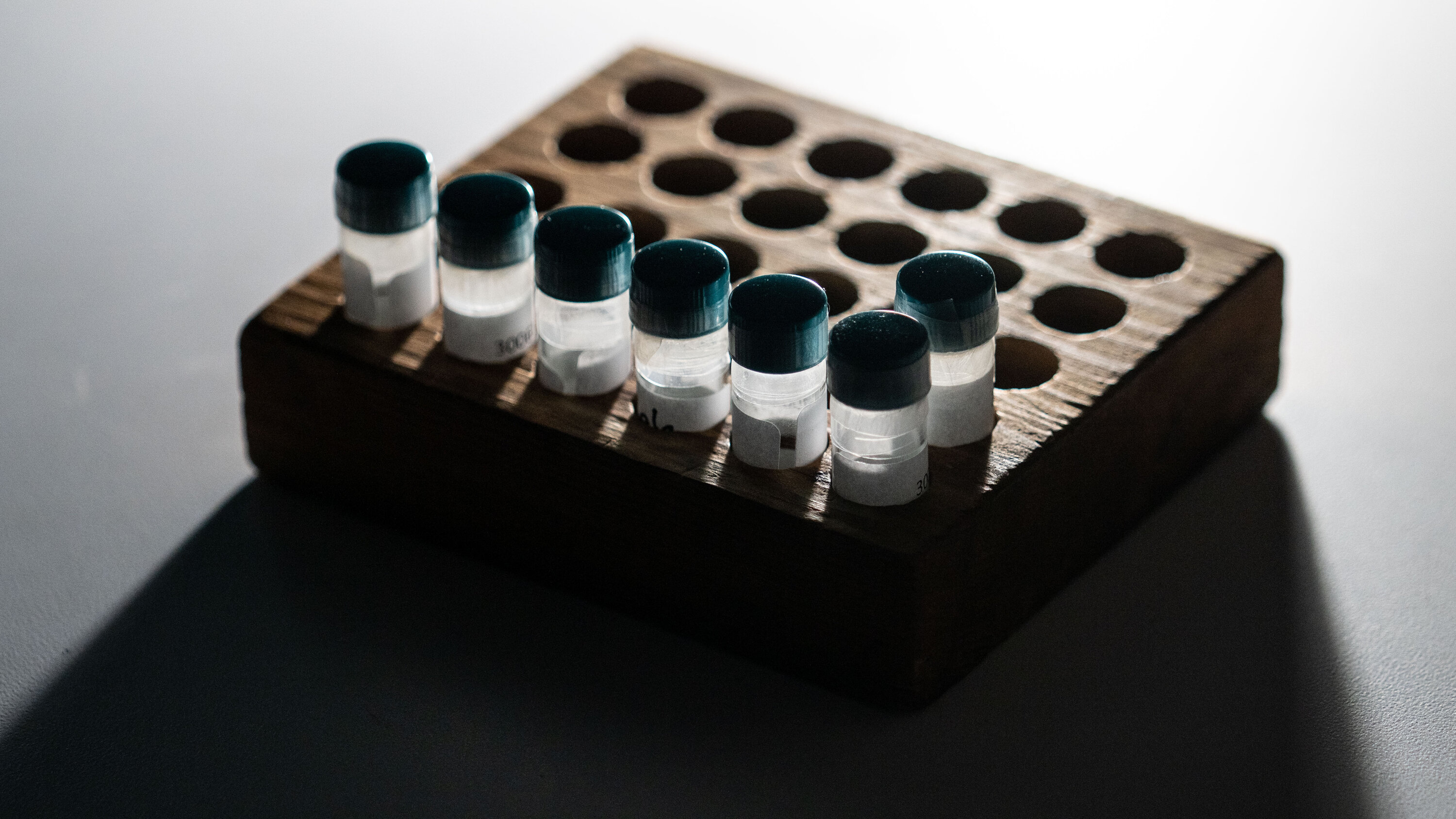 The vials of drug samples are numbered and correspond to reports that the researchers publish about the samples’ contents.CreditCredit…Erin Schaff/The New York Times

Dr. Dasgupta recalled a sample submitted by a harm reduction group in western North Carolina, which had received it from a drug user just across the border in Tennessee. Harm reduction groups in the area had been unaware of a potentially dangerous opioid, metonitazene, that surfaced in the sample, he said. Weeks later, the Centers for Disease Control and Prevention issued a report about the substance, an indication of how drug checking can offer timely warnings for users.

In two other cases, the researchers discovered xylazine in a sample from a user who had been mistakenly diagnosed with a bacterial abscess, which can sometimes call for an amputation. Some early xylazine wounds can instead be treated more like a burn, Dr. Dasgupta said, avoiding the need for more dramatic intervention. At least one of those users was spared an amputation after the presence of xylazine was confirmed, he said.

Drug policy experts say that drug checking is already leaving an imprint on health officials and members of law enforcement. Traci C. Green, an epidemiologist at Brandeis University who leads a drug checking program in Massachusetts that collects samples from harm reduction groups and law enforcement agencies, said that when government agencies and drug users communicated about what was in the drug supply, local authorities were less likely to caricature drug use.

The drug supply is “not this massive, lethal, heaving beast,” Dr. Green said. “It is something that we’re coexisting with.”

The Chapel Hill researchers keep the drug samples in a safe on campus.Credit…Erin Schaff/The New York Times
Tags
Can From Test That With

How the Worst Fears for Democracy Were Averted in 2022