AMBOVOMBE-ANDROY, Madagascar — From the time she was a young bride, all Taliasoa Vaolina knew was planting beans and corn to feed her family in their village in Madagascar. But three years ago, the worst drought in a generation set in.

Soon her crops had shriveled, her family was starving, and she had to find a new way to survive.

Madagascar, the world’s fourth poorest country, has in the last three years been strangled by drought and battered by successive cyclones and tropical storms that have only become more powerful in a changing climate.

People like Ms. Vaolina have been forced to adapt with whatever means they have. On a journey this year through a country more often known for its ring-tailed lemurs and tourism, we met people turning from fishing to raising chickens, planting hardy shrubs to shield their crops from harsh winds, learning new building techniques and eating different foods. But we also saw the heavy price that many are paying.

Ms. Vaolina trudged with her nine children twenty miles to the town of Ambovombe-Androy, where she now washes baskets of laundry in the morning and uses the profits to buy the sweet potatoes that she fries and sells in the afternoon, in a bustling market. To make extra money, she dispatches her grandchildren to help shoppers carry their goods home.

“I don’t have any business skills, but life brought me here,” said Ms. Vaolina, a 64-year-old widow, sitting near her new home — a domed tent made of empty rice sacks — in a camp for climate refugees. 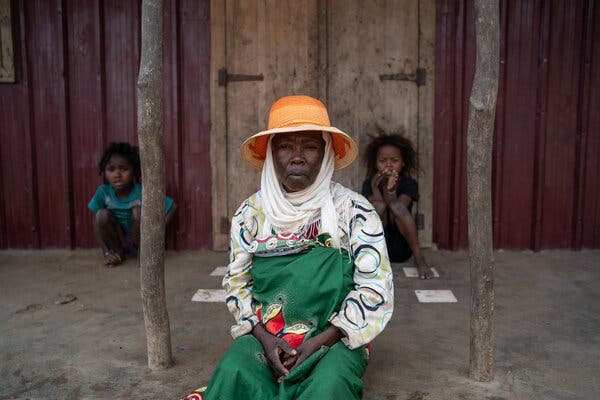 When the drought dried up her fields, Taliasoa Vaolina, a widow, moved her nine children to a camp for internally displaced people in Ambovombe-Androy, in southern Madagascar.

The scene on an unpaved national road that links Ambovombe-Androy to the capital city of Antananarivo, 625 miles north.

Climate disasters are compounding the poverty in Madagascar, an island nation off the southeast coast of Africa. During the storms earlier this year, at least 214 people were killed, and 571,000 needed food, shelter or medicine. More than two million in a country of 28 million face acute food insecurity, which could worsen by the end of this year and cause a new exodus of people from their farms to nearby towns, humanitarian agencies warn.

At the climate summit in Egypt this month, the president of Madagascar joined other African leaders in calling on wealthy nations to release funding to help poorer, vulnerable nations adapt to climate change. Madagascar’s leaders say they drew up an adaptation plan in 2021, and only need the funding, but environmentalists and economists said in interviews that the government has been slow to draw up a coherent plan despite years of extreme weather.

People in Madagascar have been left to adjust to climate emergencies largely on their own.

In Mananjary, a coastal town in eastern Madagascar that was battered by cyclone Batsirai in February.
Months after the disaster caused by Cyclone Batsirai, a district hospital in Mananjary was still treating patients in tents.

In the village of Antaritarika, at the southern tip of Madagascar, the earth is still dry and red from the drought. Years of deforestation have allowed sandstorms that locals call the “red wind” to blow in from the ocean, eroding fertile land. Masy Liafineno’e, a single mother of seven children, has planted hedges of pigeon pea shrubs as a windbreaker to shield her few rows of beans, corn and sweet potatoes that have sprouted against the odds.

The hedges, she said, are her way of adapting to the drought and wind. But she has no way to protect her crops from the plague of fall army worm, a pest that has invaded southern Africa as rainfall patterns changed.

“Even now, we are not sure we will have a harvest,” Ms. Liafineno’e said, cradling her daughter, Miraina.

Ms. Liafineno’e was pregnant at the height of the drought, and had to choose between feeding herself and her children. Hazel-eyed Miraina was born at 5.7 pounds and severely malnourished, like dozens of other babies in the district. A year later she still weighs less than ten pounds. When Miraina defied her mother’s worst fears and survived, the family celebrated her first birthday by stirring the sweet potato leaves from the protected row of crops into their rice.

Other families weren’t so fortunate. Three men nearby were making a tiny coffin for a two-year-old girl named Estella who succumbed to malnutrition. Her father, Avisoa (who, like many, goes by a single name), had walked for miles from the hospital to the village, carrying her lifeless body in order to bury her among her ancestors.

“We have nothing to take care of her, and caused her death,” said her distraught father, a rickshaw driver.

Six miles further south over a bone-rattling road, in the seaside village of Talaky Bas, warming oceans and rougher seas have made fishing more dangerous and less plentiful. Early in the drought, in 2020, the villagers decided together to make the transition to chicken farming. Unlike most others in Madagascar, the villagers of Talaky Bas had some assistance: an aid program run by Catholic Relief Services provided chickens, feed, veterinary vaccinations and training on how to care for the birds.

Demolishing a vaccination clinic that was damaged by cyclone Batsirai in Mananjary, a coastal town in eastern Madagascar.
Mananjary in June.

Valeosa, a 36-year-old fisherman and father of six, now guards a chicken coop, while his fishing nets sit bundled in a corner of his house. He did not want to give up fishing, but, he said, “I couldn’t find anything other than cactus to feed my children.”

With his share of the chicken sales, Valeosa bought a car battery that now lights up his home. He also bought a video monitor and some old DVDs, and said he plans to screen films to lift the mood in his struggling village and make some money charging strangers for seats.

Further up the country’s east coast, the town of Nosy Varika avoided drought but has been beset by lashing storms and floods. Many people in this region make their homes in traditional grass huts on stilts. But some people have used the profits from their vanilla plantations to buy cement and corrugated iron to reinforce their homes. Those who can afford it have added solar panels to their roofs.

Cyclone Batsirai, which hit in February, tested their newfound resilience. Just a few weeks before, Florette Zanabao, 52, moved into her new home with its concrete floor and iron roof. For a widowed vanilla farmer, this was a feat years in the making. When the storm warning came on the radio, she stored up rice and sheltered with her children. This was enough to weather Cyclone Batsirai, but two and a half weeks later Cyclone Emnati made landfall and caused the Sakaleona river to flood, cutting her town off from any aid for weeks.

Aid workers use cellphones to verify the identities of people lining up for food aid in the town of Nosy Varika.
Building a house in a village outside Nosy Varika, in an area that was battered by Cyclone Batsirai in February.

Ms. Zanabao was forced to join others lining up for food aid.

“We had two cyclones in two weeks,” she said. “I’m afraid that next year, there will be more cyclones passing here.”

About 330 miles to the northwest, in the center of Madagascar, the hilly capital, Antananarivo, has weathered mudslides and flooding as storms have become more severe.In January, Tropical Storm Ana hit the capital, undermining a neighborhood of historic homes built during the reign of Queen Ranavalona III at the end of the nineteenth century.

Alexandrine Olga Ravaosolo and her two sisters — all diminutive women in their sixties — stacked sandbags against the walls of the two-story home built by their father, a carpenter in the queen’s court. But the top floor was damaged, and so was the kitchen. Now, Ms. Ravaosolo’s sisters and their children and grandchildren live in shacks built around the house. Ms. Ravaosolo refuses to leave the house, but each time it rains, she is gripped with fear.

Some farmers who fled the drought in the south are now trying to earn a living in the capital collecting scrap metal and forging steel. Zomanjary, a farmer who arrived recently, is still learning how to forge metal, and living off the generosity of family members who have been in the city longer.

Alexandrine Olga Ravaosolo refuses to leave the historic house her father built in the capital, Antananarivo, even though it was severely damaged by flooding. For safety, her sisters moved into shacks in the yard.
A scrap metal market in Antananarivo. Many of the residents and vendors are people from the south who abandoned their fields because of a prolonged drought and moved to the capital.

But most have remained in the south, despite the hardship there.

On the outskirts of Ambovombe-Androy, the largest town in the southern region, the family of a farmer, Velondraza, lives close to the wild cactus fields surrounding the town. He had brought his 12 hungry children to Ambovombe-Androy during the drought.

But four of them died quickly, and the others begged in the market. It was 11-year-old Mbola, a son, who saw other families eating cactus leaves and brought some to his grieving parents. It kept them alive until the drought ended. Now, they work from the crack of dawn picking and selling cactus leaves to cattle herders. 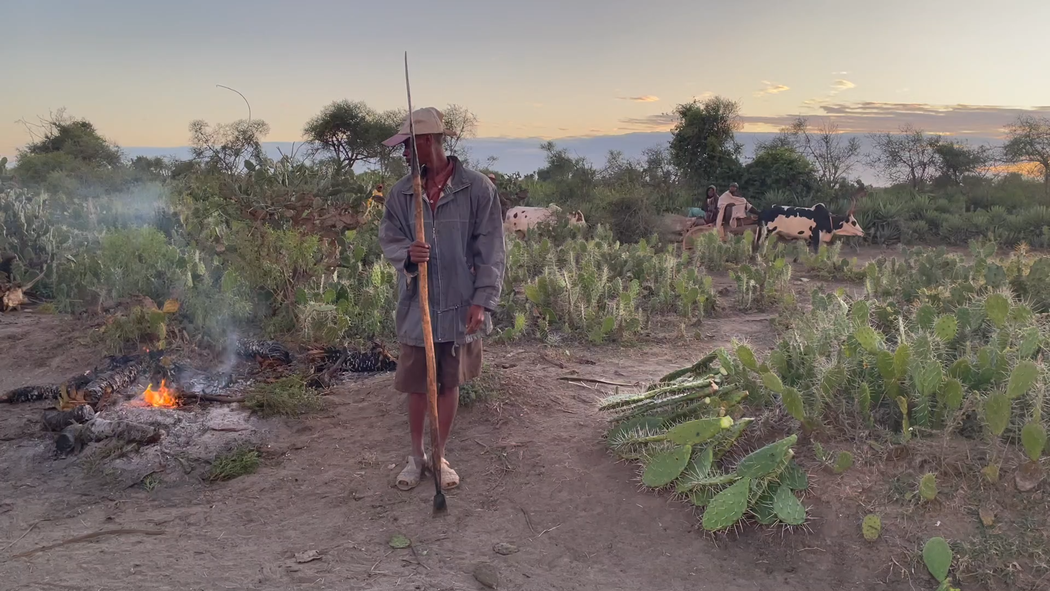 During a three-year drought in southern Madagascar, wild cactus kept thousands of people alive. They ate the prickly fruit, and when that ran out, they ate the leaves, burning off the thorns.CreditCredit…By Lynsey Chutel

When the rain finally returned earlier this year, Ms. Vaolina — the farmer turned laundress — joined the other climate refugees in the refugee camp as they danced in the rain.

But when the others began to dismantle their tents and return home, she refused. For now, life in the refugee camp, close to the market, is more predictable than life on the farm, she said.

“We are doing it by ourselves,” said Ms. Vaolina, as a family nearby boiled the discarded skin of a slaughtered cow to eat. “We keep courage by ourselves.”

A man spent the night next to his cow and cart on market day in Ambovombe-Androy in June.

Tags
People She That Was Year

The 25 Travel Experiences You Must Have