COLORADO SPRINGS — This community pressed up against the Rockies was known for years as the Vatican of Evangelicals — a home base for a well-funded, well-organized conservative Christian political movement that broadcast dire warnings about the dangers of homosexuality to the nation, and in the early 1990s was instrumental in making Colorado the only state to ever pass a law making it legal to discriminate against people based on sexual orientation.

But last weekend when a gunman stormed into Club Q, one of the city’s few L.G.B.T.Q. clubs, killing five people and injuring 18 others, many members of the L.G.B.T.Q. community and their supporters found reason to question whether Colorado Springs had made as much progress as they thought — especially in an increasingly armed nation awash in extremist views.

The authorities are now holding a suspect, Anderson Lee Aldrich, 22. He was released from the hospital and has been booked in El Paso County jail, according to a tweet from the Colorado Springs police on Tuesday. His motivations were still unclear.

Some in the community saw the attack as a reason to rethink their sense of safety and acceptance in Colorado Springs.

“It was definitely a wake up call,” said Brandon Flanery, who grew up going to an evangelical megachurch in the city but left the community when he came out as gay. He said that until this week Colorado Springs felt increasingly welcoming for people like him. Now, he said, it’s clear: “It’s still not safe.”

But others say the problem is not unique to Colorado Springs, or to the L.G.B.T.Q. community. It’s something much broader.

“I feel like the hyper-partisanship is national, and this idea of the loudest voice wins, the meanest voice wins — it doesn’t feel unique to Colorado Springs,” said Tom Shepard, a filmmaker who grew up in Colorado Springs in the 1990s and now splits his time between there and San Francisco. “The national discourse is very toxic. Of course, how can Colorado Springs not be affected by that?”

Colorado Springs for most of its history was not a particularly religious city. For generations it was a stronghold for a type of Out West Republicanism that prioritized individualism, but in the 1990s the community tried to spur its economy by giving development grants to nonprofit groups willing to relocate to the city. Dozens of evangelical groups moved in, including the hugely influential group Focus on the Family, whose founder, James Dobson, hosted a daily radio show that reached millions. 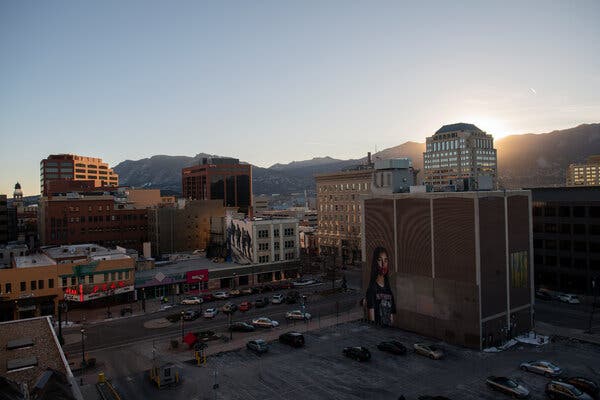 The population in Colorado Springs is now 480,000, the result of an enormous influx of newcomers.Credit…Daniel Brenner for The New York Times

“It was definitely a wake up call,” said Brandon Flanery.Credit…Joanna Kulesza for The New York Times

Until then, the city was known as “a preachers’ graveyard,” said Mark Cowart, who has been the pastor of Church for All Nations for 37 years. But quickly, he said, “It kind of became the Mecca of Christianity.”

Soon Colorado Springs was what Pastor Ted Haggard proudly described at the time as “the Vatican of Evangelical Christians.” He built a megachurch called New Life Church that at its height had a congregation of 10,000. He later resigned amid allegations involving a male prostitute.

The newcomers to the city tried to remake the region as their own, at times pressuring schools to do things like get rid of Halloween celebrations, which they saw as occult.

In 1992 local evangelicals wrote a constitutional amendment passed by state voters that protected the right to discriminate in employment or lodging based on sexual orientation.

The law led to a boycott of the city by some progressive groups, which branded Colorado Springs “the hate city.” The new law was quickly overturned in the courts, but in many ways, locals say, it had the opposite of its intended effect, and unified the opposition.

“We realized we could not be complacent; we had to fight against that kind of bigotry and not discriminate,” said James White, who was pastor of the city’s First Congregationalist Church during the 1990s and opposed the discriminatory amendment. “We had to come together and speak out.”

“It made a huge difference,” said Mary Lou Makepeace, who served as the city’s mayor from 1997 to 2003. “The things people used to say, they don’t say anymore. They’d be shunned.”

Pushing the city to be more inclusive wasn’t always easy, she said. She received blistering criticism when she signed the first city proclamation recognizing an annual gay-pride week in 1999. But, she noted, the city has changed. She pointed to a plan this week to hang a giant rainbow flag on City Hall in remembrance of those killed at Club Q. “That shows how far we’ve come,” she said.

Other factors also shifted the city’s tone. The population is now 480,000, the result of an enormous influx of newcomers, many from the coasts, who have helped create a more diverse community.

At the same time, the stance of many Christians started to shift. A number of prominent churches in the city split over questions of gay rights. The generation of leaders who opposed what they called “the gay agenda,” including Mr. Dobson, retired, and new leaders often took a more measured approach.

“This horse is out of the barn,” Jim Daly, who took over as president of Focus on the Family, said of issues like gay marriage. “Now we’ve got to concentrate on, how do we live in a pluralistic society, where everybody can express their views and not be vilified.”

Mr. Daly condemned the shooting at Club Q. “We are never for violence against anybody,” he said. “I think there’s a perception that somehow if we have a deep difference of opinion on the definition of marriage that somehow we are simply a hate group. We do not see ourselves as that. As Christians we are trying to live out what we read the Scriptures to tell us.”

A level of cultural awareness that would have been unthinkable a decade ago was reflected when the police made a point of identifying victims using the names and pronouns that the victims used.

Even so, several gay-rights activists and politicians from the area said that, despite progress, anti-gay sentiment still thrived in much of El Paso County, and that schools here had been divided by the wider national battle over whether students should discuss L.G.B.T.Q. issues in class or allow books dealing with sexuality in school libraries.

Last February, a school board member put up a Facebook post disparaging transgender people, prompting a walkout and protest by students.

“We’re still very conservative,” said Heidi Beedle, a journalist at The Colorado Times Recorder who lives in Colorado Springs and is transgender. “It’s become more accepting, but at the same time, you get the conservative backlash.”

A grim reminder was the 2015 shooting at a Planned Parenthood clinic that left three dead and nine injured.

But in many ways, the changing city reflects the changing nation. Colorado Springs is populated by people who overwhelmingly moved from elsewhere, and the resulting culture approaches a national average, reflected in its ubiquitous chain stores and fast food joints. The blocks of businesses surrounding Club Q on a busy commercial strip could easily be in Dallas, Detroit or Denver. In the same way, it has absorbed the larger cultural tide that has shifted toward more openness and acceptance of L.G.B.T.Q. people.

Colorado Springs still faces real challenges, locals say. But they are different from those of the past.

Mr. Shepard, the filmmaker, said the reason places like Club Q thrive is that people need a place to be the person they might not be able to be at home or in public.

But he said he felt safe in Colorado Springs.

Society-wide intolerance is no longer the problem, he said. It’s guns. Since the 1990s, the growth of gun ownership, particularly ownership of military-style rifles like the one used at Club Q, has soared across the country, and Colorado Springs is no exception.

The local newspaper runs a weekly front-page ad selling assault rifles and silencers. Gunmen acting alone have targeted not only a gay club and an abortion clinic in the city, but also New Life Church. The day after the Club Q shooting, a man with an assault rifle fired several shots at police officers responding to a domestic dispute.

The sun rising over Pikes Peak, not far from Club Q.Credit…Rachel Woolf for The New York Times

Tags
City Said That Time Was