Many heartwarming stories have developed in the seven years since Prime Minister Justin Trudeau greeted Syrian refugees arriving by plane in Toronto. But few caught the public’s attention as much as that of Tareq Hadhad, who was aboard the third planeload of Syrians to land in Canada, and his family. 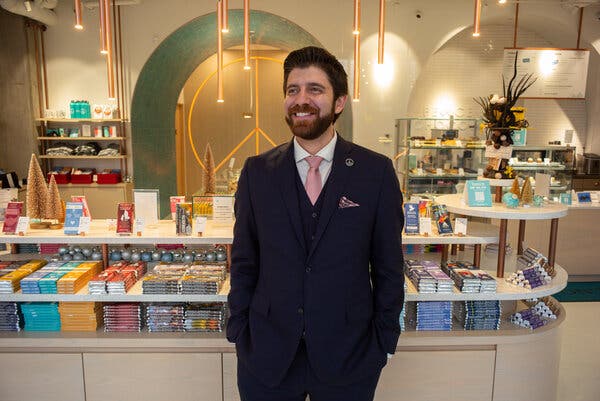 In addition to receiving widespread media attention, Mr. Hadhad’s story has been made into a movie and also been told in a book.

For those of you who don’t quite remember their tale, a quick recap. Back in Syria, Mr. Hadhad’s father, Isam, had founded a confectioners in Damascus that eventually employed hundreds of people and shipped its chocolates throughout the Middle East. Bombing during the civil war leveled it.

The Hadhads became privately sponsored refugees in Antigonish, Nova Scotia. While the town is the home of St. Francis Xavier University, it is generally known for having an aging population rather than being economically vibrant.

Mr. Hadhad was midway through medical school when he fled Syria. But once in Canada, and with considerable help from the people of Antigonish, he vowed to re-establish his father’s business under the name Peace by Chocolate.

Mr. Hadhad agreed to meet me in Halifax for an update on the business and to talk about the role of immigrants in Canadian society.

Peace by Chocolate now employs about 75 people in an area where jobs are scarce.Credit…Ian Austen/The New York Times

Our meeting point, the brightly lit Peace by Chocolate flagship store in heart of the Halifax waterfront tourist zone, was one obvious symbol of the company’s fortunes, with a design featuring both peace symbols and motifs drawn from Syria, including a tiled archway.

Its opening in the spring of 2021 during the pandemic was something of an act of faith. But Mr. Hadhad told me that the return of cruise ships to Halifax this year has often brought long lines of customers outside the store. And even on a bitterly windy and dark late weekday afternoon, it drew a steady flow of chocolate fanciers.

This month, Mr. Hadhad opened a new, bigger shop and expanded the factory that produces the company’s chocolate. In all, Mr. Hadhad told me, Peace by Chocolate now employs about 75 people and could hire 30 to 40 more workers — if they were available in Antigonish. About 1,000 stores across Canada now sell its chocolates, thanks in part to a deal with the Empire Company, the Nova Scotia-based grocer that owns the Sobeys and Canada Safeway supermarket chains.

Building a business in Canada, he said, is much easier in than in Syria.

“It took my dad 10 years to establish the business in Damascus,” Mr. Hadad said. “You did it here kind of within a month.”

While Mr. Hadad said that factors like easier access to investment money in Canada make it possible for immigrants to set up successful businesses, community support for immigrants is just as important.

Mr. Hadhad is obviously proud of his family’s success and was pleased to talk about it. But he was also keen to discuss what’s become something of a personal mission for him: eliminating barriers for newcomers and showing Canadians the economic value of immigrants.

A former medical student, Mr. Hadhad is disturbed that many immigrants are unable to use their skills immediately when they come to Canada; instead, they often must undergo additional schooling, and face slow and costly certification processes.

Mr. Hadhad was told that if he wanted to pursue his medical studies, he would have to return to high school, obtain a Canadian undergraduate degree and then take medical school admission exams.

“It was absolutely ridiculous,” he said, adding that the regulations forced him to turn his thoughts to the chocolate business.

Mr. Hadhad regularly speaks across Canada, meets with governments and testifies to legislative committees about immigration. Based on that, he said he’s noticed there may finally be some movement when it comes to recognizing professional health care credentials obtained abroad.

“Change is happening not because of the willingness of politicians to solve the problem but because of the shortages in the health care sector” because of the pandemic, he said. “We are discriminating against all those people and causing them to live in depression and anxiety and fearing for the future of their families.”

The Hadhad family story has become the subject of a movie and a book.Credit…Ian Austen/The New York Times

Mr. Hadhad has made sure Peace by Chocolate has a social component to it. He said there are now about 200 Syrians living in Antigonish, population 5,000, most of whom work for the chocolate company, and they’ve recently been joined by several dozen Ukrainian refugees. Peace by Chocolate donates about 5 percent of its profits to various causes and charities.

While Mr. Hadhad has occasionally encountered anti-immigrant hostility (he said a man once accused him of coming to Antigonish to take his job), his experience has been that such sentiments are very much on the fringe.

“Everyone is seeing that this country is based on many values,” he said. “The most important values that Canada has are compassion, empathy.”

The Montreal apartment of Mario Bennett, a Celine Dion superfan.Credit…Guillaume Simoneau for The New York Times

How are we doing?
We’re eager to have your thoughts about this newsletter and events in Canada in general. Please send them to nytcanada@nytimes.com.

Tags
About Had That Was With