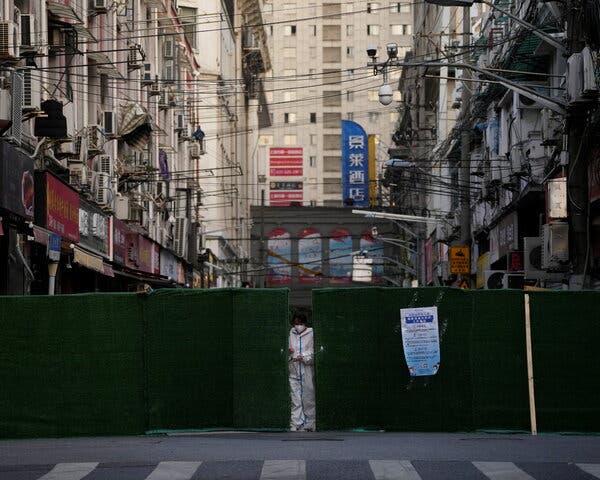 Locking the barrier to a residential area in Shanghai under lockdown in May.Credit…Aly Song/Reuters

This was a year where the news cycle sometimes seemed relentless, and the ping of yet another alert typically brought more shocking news.

The Russian invasion of Ukraine devolved into a long and desperate slog that is now estimated to have killed more than 40,000 civilians and displaced up to 30 million more. The Supreme Court overturned Roe v. Wade, ending the constitutional right to abortion in the U.S. In Pakistan, flooding devastated hundreds of villages, killing around 1,500 people and affecting more than 33 million. Iran is experiencing the deadliest protests in decades.

Economically, these were rough times. The British pound hit a historic low against the U.S. dollar, and central banks yanked hard on interest rates to curb inflation. As the year draws to a close, the cost of heating fuel is biting hard, and a global recession looms. China’s “zero Covid” approach to the pandemic hurt businesses and strangled growth.

In politics, people voted for change in Australia, Brazil, Italy and Sweden, and for familiar faces in France and Denmark. In Israel, Bibi is back. Elon Musk owns Twitter now. And in sports, February brought a deeply strange Olympics in Beijing, with an equally unusual World Cup in Qatar at the end of the year.

But it wasn’t all doom and gloom: On the lighter side, 2022 brought us Wordle, Abba’s digital residency in London, the inaugural Tour de France Femmes, even a new Beyoncé album. Next year has moments of levity and ingenuity already on the schedule, including potential changes to daylight saving in the U.S. and a remembrance of Pablo Picasso on the 50th anniversary of his death.

Ukrainian fighters in Irpin earlier this year.Credit…Daniel Berehulak for The New York Times

The year in images

Each year, our photo editors sift through months of images in an effort to pick the most startling, most moving, most memorable pictures of the year.

The war in Ukraine was not the year’s only story, but it was visually one of the most powerful. Photographers for The Times filed about 16,000 pictures, often in circumstances that endangered their lives.

Joseph Kahn, The Times’s executive editor, describes how those images captured the shifting dynamics on the ground, as Ukrainians went from terror and disbelief to grim resignation and resilience. “Moments of optimism and joy do arrive,” he writes. “We see what they have lost because of Vladimir Putin’s aggression against their country — but also what they refuse to lose.”

Memorable moments: A bullet-riddled notebook retrieved after a deadly school shooting in Uvalde, Texas. The daughter of Ketanji Brown Jackson, gazing in admiration as her mother became the first Black woman on the Supreme Court. And the defiance of elegantly dressed Ukrainian teenagers dancing in Odesa.

Concert halls, theaters, galleries: After two years of closures and postponements, audiences this year gradually made a return to experiencing the arts in person.

Our film critics, even as they found themselves pondering the state of cinema, found much to love on the big screen. A.O. Scott’s favorite films of the year, he writes, “seem to question not only the aspects of human experience they represent, but also their own methods and assumptions.” Manohla Dargis found herself heartened by all of the good and great movies that are still being released. There was plenty to enjoy on television.

In the world of visual art, high points in New York City included an adult-feeling Whitney Biennial, contemporary Puerto Rican art and a fabulous Matisse exhibition. Shows in Paris celebrated works by Alice Neel and Ed Ruscha, and in Kassel, Germany, the mega-exhibition Documenta was “remarkable” or “catastrophic,” depending on whom you asked.

Latin music thrived this year by refusing to compromise, as forward-looking stars like Rosalía and Bad Bunny used their distinctive sound to explode onto the global scene. In “Popcast,” our critics debated their year-end lists of the best LPs. Here are their picks for the best songs. We also selected the best classical tracks, including fresh takes on Mozart, Dvorak and Debussy.

Our obituaries section celebrates, honors and revisits the lives of people who shaped the world. Read about the artists we lost in 2022, in their own words, and revisit five obituaries that stood out:

Catch up on four of the most-read stories in The Times this year:

A year of writing the briefing

Many of the stories you read in this newsletter first land with the editors in our Asia hub in Seoul, after correspondents from across the region write their articles. As editors in Seoul wrap up their day, our London team takes over.

Then, it’s my turn to get to work in New York. I write while you sleep, piecing together a morning newsletter that features everything you need to know to start your day.

In October, I visited our Seoul office during the days before Xi Jinping secured a third term as head of China’s Communist Party. Our China correspondents were sleeping little and reporting late into the night, trying to peer into Beijing’s secretive upper echelons.

Now, back at my desk on Eastern Time, I enjoy being part of a global newsroom and reaching out to a global audience. Thank you for reading our work every day and for sharing your thoughts with us. I hope to hear more from you in the new year — about the stories that resonated with you and about what we could have done better.

Cheers to another year together, wherever we are in the world. I’ll be back tomorrow. — Amelia

The D.J. Mark Ronson, who celebrates both Christmas and Hanukkah, shares his perfect holiday playlist.

How to manage holiday stress.

Here’s today’s Mini Crossword, and here is the Spelling Bee.

“Wordle” started with a love story. The game, acquired by The Times this year, was invented by the engineer Josh Wardle as a gift for his word-game-loving partner. Play today’s edition, and then test your strategy with Wordlebot.

That’s it for today’s briefing. Thanks for joining me this year, and see you tomorrow. — Natasha and Amelia

Reach the team at briefing@nytimes.com.

Tags
News Read That Was Year

Terry Hall, a Face of Britain’s Ska Revival, Is Dead at 63

How strong is a magnitude-7.8 quake?