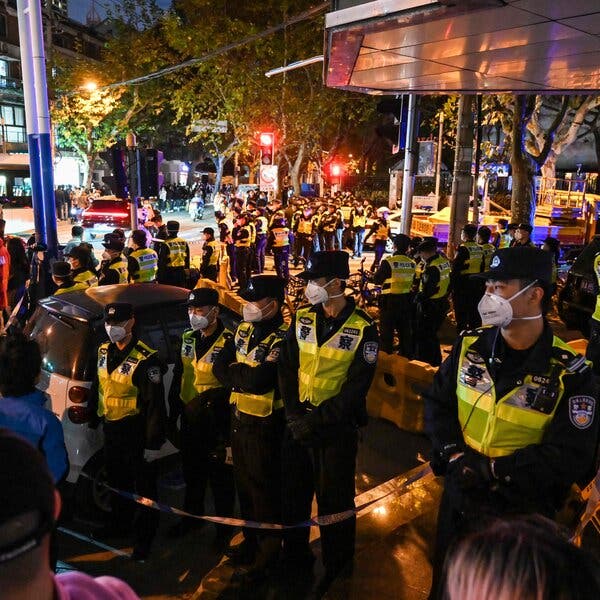 After at least 10 people died in an apartment building fire in the western Chinese city of Urumqi, many suspected that a Covid lockdown had hampered rescue efforts or trapped victims inside their homes. Speculation spilled into fury online: The event has now unleashed the most defiant eruption of public anger against the ruling Communist Party in years.

In cities across China this weekend, thousands gathered with candles and flowers to mourn the fire’s victims. On campuses, students staged vigils, many holding up pieces of blank white paper in mute protest. In Shanghai, some residents even called for the Communist Party and its leader, Xi Jinping, to step down — a rare and bold challenge.

The broader source of anger is Xi’s “zero Covid” strategy, which seeks to eliminate infections with lockdowns, quarantines and mass testing. The policy has brought many Chinese cities to a near standstill, disrupted life and travel for hundreds of millions and forced many small businesses to close.

Context: Protests are relatively rare in China, where dissidents have been imprisoned, social media is heavily censored and independent groups involved in human rights have been banned. But the pervasiveness of China’s Covid restrictions has created a focus for anger that transcends class and geography.

Analysis: “The immediate challenge is whether and how they’re going to continue with ‘zero Covid’ when there is so much frustration,” said Minxin Pei, a professor of government at Claremont McKenna College. “You can arrest people and put them in jail, but the virus will still be there. There are simply no easy answers for him, only hard choices.”

A desperate struggle in Bakhmut

The eastern Ukrainian city of Bakhmut, in the Donbas region, has become a destructive vortex for both Russia’s and Ukraine’s militaries. As Russians mount desperate attempts to capture the city and the Ukrainians to hold it, the city, which once had a population of around 70,000, has slowly been chewed apart.

The bombardment in and around Bakhmut is now at an intensity never before seen, witnesses said. Buildings that had been shelled before have been shelled again. The front line, on the city’s outskirts, looks like a muddy moonscape or a scene from World War I. At night, residents can hear the rumble of Russian jets prowling the skies.

The intensity of Russia’s attempts to seize the city has baffled military analysts, who say the Russians are unlikely to succeed, especially after the loss of their foothold in the northeast. Elsewhere along their 600-mile front line, the Russians are mostly digging in for winter to entrench and conserve resources.

Latest: Ukraine has sent floods of reinforcements into Bakhmut, including special operations forces and lesser trained territorial defense fighters, according to soldiers, local residents and a U.S. defense official. The Russian onslaught includes support from the Wagner Group, an infamous paramilitary organization, as well as rank-and-file forces redeployed from the Kherson front.

In other news from the war: Increasingly frigid winter weather presented new challenges for Ukraine. Mud has churned up battlefields, and snowfall has added urgency to the task of restoring power supplies devastated by weeks of Russian bombing.

The low-level drug dealer convicted as a slave master

Glodi Wabelua left prison for the third time at 28, determined to find a real job and a home and to avoid returning to dealing drugs, the only work he had ever known. But with a host of restrictions on where he could go, what he could spend money on and even whom he could date, housing and employment proved elusive.

These were not ordinary restrictions. Some read like those for a sex offender: Wabelua’s Instagram account is limited to users over 18. He cannot be near children or go to schools or youth clubs. And, most critically, he needs the government’s blessing before he can accept a job. Any breach can send him back to prison for up to five years.

Wabelua has never denied selling drugs. But the harshness of his punishment relates to his having dispatched a 16-year-old runner — not unlike himself — to sell drugs, which the British government argued made him a slave master. He was the test case for a novel interpretation of a 2015 law that was written to prevent the trafficking of Vietnamese women and children.

Background: As part of a two-year investigation into Britain’s war on drugs, Selam Gebrekidan, a reporter for The Times, corresponded with Wabelua while he was in prison. She followed him for months after his release as he tried to build a new life.

“Miss Con” beauty pageants are a wildly popular, unabashedly skin-deep phenomenon at campuses across Japan, including at pedigreed universities like the University of Tokyo and Keio University, which are considered training grounds for elite political and business leaders.

Finalists attract thousands of followers on social media and offers of corporate sponsorship. Some go on to become models, television announcers or “talents” — women who appear on variety, comedy and even news talk shows, where they are valued more for their looks than for their skills or knowledge.

Watching the World Cup with Qatar’s migrant workers: The migrants who helped build the World Cup sites in Qatar are largely left out of any tournament festivities. Adam Crafton went to watch a match with them.

Argentina is alive, and Lionel Messi isn’t going anywhere: “We needed this result,” Messi said after his starring role in Argentina’s 2-0 win against Mexico. “We needed this euphoria.”

How Canada were sent crashing out of the World Cup: John Herdman’s gambles backfired as the midfield battle was lost to Croatia — but this squad will be stronger for their Qatar campaign.

From The Times: Germany has confronted its gloom. Now, after a tense, forlorn week, it can see hope once more.

An abstractionist before the official advent of abstraction, the Swedish painter Hilma af Klint was a member of an all-female group called the Five from 1896 to 1907, participating in meditation and séances to channel the messages of mystics.

Af Klint harnessed her spiritual practice into unorthodox, nonfigurative paintings, which are now collected in a seven-volume retrospective catalog edited by Kurt Almqvist and Daniel Birnbaum.

Though recognized during her lifetime only for the portraits or landscapes that paid her bills, af Klint left behind detailed instructions on how she wanted to be remembered. This catalog is organized accordingly — not chronologically, but by series: first the drawings, then the most famous “Paintings for the Temple,” the “Blue Books,” “Parsifal and the Atom,” the geometric series, the late watercolors and, finally, the figurative works.

As af Klint’s notebooks reveal, “she felt that the world was not quite ready for the message the pictures were meant to communicate.” Generations later, the history of Western abstract art has been rewritten, with af Klint at the helm.

“The Easy Life,” Marguerite Duras’s second novel, has been translated into English for the first time.

Here’s today’s Mini Crossword, and a clue: Give two thumbs down (three letters).

Thanks for starting your day with The Times, and see you tomorrow. — Natasha

P.S. How well did you follow last week’s headlines? Take our quiz.

Start your week with this narrated long-read about the strangeness of one of the world’s quietest spots.

Send thoughts, feedback and anything else to Natasha and the team at briefing@nytimes.com.

Tags
Can That This Time With

Is Trump Way Up or Way Down?