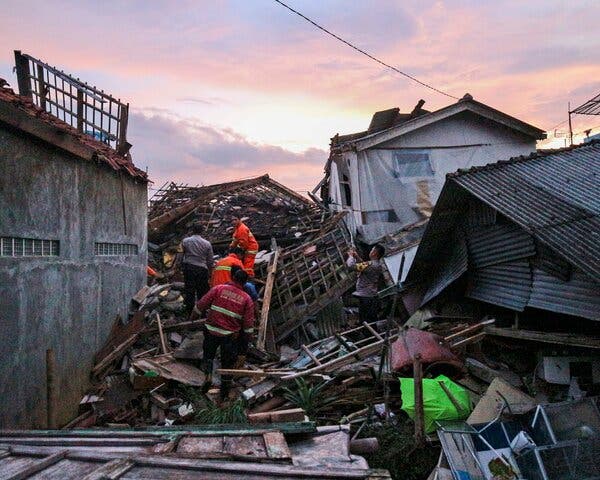 A fatal earthquake in Indonesia

At least 162 people were dead after a powerful earthquake struck Java, Indonesia’s main island, yesterday. Hundreds more were injured. Officials expect the death toll to rise sharply — many people are trapped under damaged buildings or in landslides.

Damage from the 5.6-magnitude quake prevented many people from reaching the main hospital in ambulances. Instead, injured people reportedly arrived on motorbikes. Here’s a video of the damage.

The hospital itself was damaged and lost power. The government erected tents outside to treat injured people, and others were being treated in smaller hospitals nearby. “This is overwhelming,” a government official told reporters.

Context: The district where the quake struck, Cianjur, is one of Indonesia’s most disaster-prone areas. It suffers frequent floods, landslides and droughts as well as earthquakes, tsunamis and volcanic eruptions.

History: Indonesia lies on the “Ring of Fire,” an arc of volcanoes and fault lines along the Pacific Basin. An earthquake off Sumatra in 2004 caused a tsunami that killed nearly 230,000 people, more than half of whom were in Indonesia.

Prominent Iranians are increasingly showing support for the antigovernment protests that have engulfed the country for two months.

At the World Cup yesterday, Iran’s soccer players declined to sing the national anthem or celebrate after either of its two goals. (England beat Iran, 6 to 2.) In the stands, some fans sang the pre-revolutionary national anthem instead. Some Iranians who were carrying pre-revolutionary flags, seen as a protest against the theocratic government, were denied entry to the stadium.

And at a news conference on Sunday, Ehsan Hajsafi, the team’s captain, said: “We have to accept that the conditions in our country are not right and our people are not happy.”

Context: Displays of activism carry the risk of reprisal, especially for players who must return to play in Iran’s domestic soccer league.

Film: In Tehran, two well-known actresses — Hengameh Ghaziani and Katayoun Riahi — were arrested over the weekend for defiantly removing their head scarves. They are the latest people involved in film to speak out, defying a widespread crackdown on the country’s acclaimed cinema industry that preceded the recent demonstrations.

Kurds: Iranian Kurdish opposition fighters in Iraq face attacks from Iran and pressure from Iraq to give up their weapons.

A Swiss player wore the “One Love” armband at a friendly soccer match in the U.A.E. last week.Credit…Laurent Gillieron/EPA, via Shutterstock

A World Cup fight over armbands

A group of European soccer federations had planned for team captains to wear rainbow-colored armbands for World Cup games in support of L.G.B.T.Q. rights. (Qatar, the host country, criminalizes homosexuality.)

Over the weekend, it seemed that they were going to go forward, despite pressure from soccer’s governing body, FIFA. The teams appeared willing to accept a fine for defying FIFA’s strict uniform rules.

But by yesterday they faced a new dilemma: Seven teams released a statement saying that FIFA had threatened to issue a yellow card to any player wearing the unsanctioned armband. That could put a player at risk; receiving a second yellow card could result in immediate dismissal and suspension for the next game.

The teams relented. They said that they were “prepared to pay fines” but that they could not “put our players in the situation where they might be booked or even forced to leave the field of play.”

“We are very frustrated by the FIFA decision, which we believe is unprecedented,” the federations said.

Videos circulating online show before-and-after scenes of an encounter in which at least 11 Russians, most of whom are seen lying on the ground, appear to have been shot dead at close range.

Was the $100 billion deal between AT&T and Time Warner the worst merger ever?

Time Warner’s executives saw AT&T as just a “big phone company from Texas.” At AT&T, executives thought Hollywood would play by their rules. That combination led to a strategic miscalculation unrivaled in recent corporate history.

“Neighbours” is coming back

When Australia’s longest-running television drama ended in July, devotees and employees hoped for a last-minute miracle. They grieved, a longtime writer for the show said, holding small parties to say goodbye to each other.

Then, just months later, the production company announced an unexpected revival of “Neighbours.” Amazon will be a partner, and the new series will start filming in Australia next year. Streaming could change the tone — it no longer has to air in a British broadcast time slot, and so doesn’t have to adhere to a G rating — and shake-up the business model.

But the bones of the sweet, uncontroversial drama are likely to stand, the writer said. In Britain, which accounted for the majority of its viewers, it offered escapism. In Australia, the writer said, its appeal is wrapped up in nostalgia and familiarity: “It’s like Vegemite. You know it’s always on the shelf.”

For more, sign up for “The Australia Letter,” a weekly newsletter.

Omurice, a beloved staple of Japanese home cooking, is a linguistic and literal mash-up of omelet and rice.

“EO” follows a donkey. The film, a Times critic’s pick, is a “wild, boldly expressionistic movie” that conveys his animality and un-knowableness.

Are you distracted or is it adult A.D.H.D.?

Play the Mini Crossword, and a clue: Consonant-heavy gift from the Magi (five letters).

Here are the Wordle and the Spelling Bee.

That’s it for today’s briefing. See you next time. — Amelia

“The Daily” is on an investigation into Donald Trump.

You can reach Amelia and the team at briefing@nytimes.com.

Tags
From New People Play That