As a married father with young children, gun enthusiast and former Army paratrooper on a campus dominated by liberals, Stewart Rhodes stood out among the roughly 200 students who enrolled at Yale Law School in 2001.

Still, few of his former classmates could have anticipated how sharply their paths would diverge. Jurors are expected to begin deliberating as early as Monday whether he committed seditious conspiracy in connection with the Jan. 6 assault on the Capitol.

Just five years after their law school graduation, Mr. Rhodes, whose full name is Elmer Stewart Rhodes III, founded the Oath Keepers, a far-right militia whose members believe that the federal government is poised to strip citizens of their rights and who vow to disobey what they consider unconstitutional orders.

Prosecutors say that Mr. Rhodes and other members of the group plotted to storm the U.S. Capitol on Jan. 6, 2021, and prevent the transfer of power from Donald J. Trump to Joseph R. Biden Jr. Mr. Rhodes and 10 other Oath Keepers and affiliates are accused of recruiting participants; organizing training in paramilitary combat; coordinating travel and logistics; and bringing weapons to the Washington, D.C., area in the days leading up to Jan. 6. (Five of his associates are on trial now. There will be another trial for others next year.)

Mr. Rhodes has denied planning to attack the Capitol, arguing that the Oath Keepers were in Washington to protect prominent supporters of Mr. Trump. 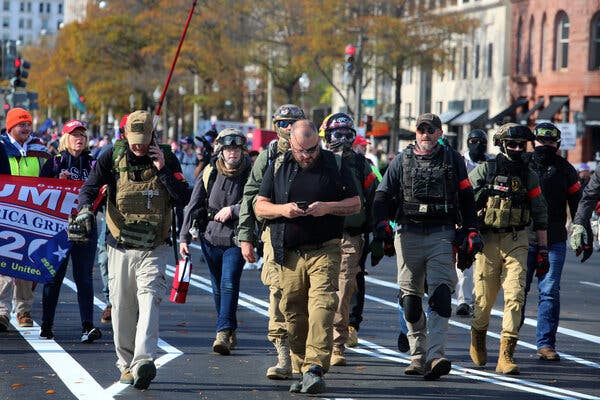 Mr. Rhodes, center, at a Trump rally in Washington, D.C., after the election in November 2020.Credit…Robyn Stevens Brody

Mr. Rhodes’s trajectory from a libertarian student at Yale to a defendant facing a charge that carries a maximum sentence of 20 years in prison, plus other charges, has riveted and unnerved many of his former peers.

Despite its liberal reputation, Yale Law School has produced a number of notable conservatives, including J.D. Vance, the Republican senator-elect from Ohio, who graduated in 2013, and Senator Josh Hawley, a Republican from Missouri, who was two years behind Mr. Rhodes. Even so, in the early 2000s, Mr. Rhodes was a distinctive presence on campus, whose experience reflected a gulf in social status and ideology separating him from many of his classmates.

“People find ways to distinguish themselves, either by fitting in or by standing out,” said Jon Michaels, a professor at the U.C.L.A. School of Law and former classmate. “And my sense of Rhodes is, he was standing out.”

Through one of his lawyers, Mr. Rhodes declined an interview request.

At Yale, Mr. Rhodes did not yet have his characteristic goatee and eye patch. He was clean-shaven, with a prosthetic eye, the result of a self-inflicted gun accident. He had unconventional opinions and could seem unusually focused on gun rights, former classmates said. Still, some remembered him as a well-intentioned peer who worked to find common ground despite being in the political minority.

Understand the Events on Jan. 6

The terrorist attacks on Sept. 11, 2001, during his second week of law school, had a profound impact on him.

On the witness stand, Mr. Rhodes recalled being in a torts lecture when news of the attacks spread.

“A lot of my fellow students collapsed, and were just in heart-rending grief,” he said, adding, “And of course, after the grief came the anger.”

In classmates’ memories, and in Mr. Rhodes’s own telling, the attacks were a galvanizing moment that sharpened his political ideology. He grew increasingly alarmed by the expanded uses of surveillance and detention by the administration of President George W. Bush, which he saw as unconstitutional overreaches.

“You had the sense that he was sort of keeping his powder dry, for the most part,” said Stephen Vladeck, a professor at the University of Texas School of Law. “The times he would speak up, it was often about fears that the government was actually going too far and infringing on the rights of Americans.”

His professors at Yale declined to be interviewed, many citing student privacy concerns.

Mr. Rhodes, 57, was born in Fresno, Calif., his mother a farmworker and his father a Marine. He grew up poor, moved frequently, and graduated from high school in Las Vegas. He served in the Army in the mid-1980s, receiving an honorable discharge following an injury in a parachuting accident.

Mr. Rhodes with his grandparents during his service in the Army. Credit…Tasha Adams

Tasha Adams met Mr. Rhodes in Las Vegas in the early 1990s. He was well-read, fascinated by history and politics, and seemed to promise a “life of adventure,” Ms. Adams said. They married in 1994. In 2018, Ms. Adams, who was involved in the Oath Keepers initially but later distanced herself from the organization, filed for divorce, accusing Mr. Rhodes of physical and emotional abuse. They remain separated, and the application is still pending.

On the witness stand, Mr. Rhodes told the jury that an admissions officer at the law school had told him that she cared about the “party model.”

“If you’re going to have an interesting party and have interesting guests, who would you invite?” he said. “So she wanted people like military veterans, folks from out West, people with different backgrounds.”

Jean Webb, the director of admissions at Yale Law School from 1985 to 2002 — including the cycle in which Mr. Rhodes was admitted — said that she did not remember Mr. Rhodes, and that the party metaphor was not one she would have used.

There were no specific thresholds for acceptance or standards for diversity, Ms. Webb said, though over time, the school developed an interest in admitting more first-generation students and veterans. Above all, she said, faculty members were looking for “good thinkers.”

She added that the school was also seeking “people who wanted to be of service to their community, to their country, to be in leadership positions.”

In class, Mr. Rhodes seemed engaged, but not unusually so, former classmates said. Malcolm Seymour, a New York litigator and member of Mr. Rhodes’s class, recalled him as a polite, intelligent classmate who often agreed with left-leaning peers on Bush-era civil liberties issues.

He taught self-defense classes for female students, and as part of a group called the Yale Law Gunners — a play on a term denoting students who “gun” for the highest achievements — he took peers shooting at a local range. Mr. Rhodes seemed to take pleasure in teaching classmates how to shoot a gun, Ms. Adams and former students said.

Tasha Adams, Mr. Rhodes’s estranged wife, was initially involved in the early Oath Keepers but later distanced herself from the organization and filed for divorce.Credit…Lido Vizzutti for The New York Times

Elizabeth Lee Beck, a Miami litigator and member of Mr. Rhodes’s class, said that Mr. Rhodes struck her as tolerant and open-minded within an institution that could seem, to her, oppressively liberal.

“I know that some people view him as a scary Nazi,” she said. “I don’t share that view; he’s just earnest Elmer.”

At home, Mr. Rhodes’s time in law school was fraught, Ms. Adams said. They arrived in New Haven with two children and eventually welcomed a third. It was a stressful, isolating period, she said.

“He didn’t know what to call his tribe when he was at Yale,” she said, adding that the demands of family and school were intense.

She said: “A lot of times he would just toss me books and say, ‘I don’t have time to read this. Read this and give me notes.’”

In the early 2000s, Yale Law School could feel like a protected bubble, where students were “floating in the world of ideas,” said Professor Michaels, from U.C.L.A.

But for Mr. Rhodes, there were few abstract issues. The topics he became obsessed with often emerged out of a “deep self-interest,” Ms. Adams said.

In his final year, Mr. Rhodes won a school prize for a paper arguing that the Bush administration’s designation of enemy combatants was “dangerous to our freedoms and way of life.” Nearly two decades later, he told the jury at his trial that a “big impetus” for his creation of the Oath Keepers was “what I had learned during the Bush years of enemy-combatant status.”

Mr. Rhodes’s extremist views had already begun to coalesce by the time he arrived on campus, Ms. Adams said, “but he was always hiding it.” There were times, though, when they broke jarringly through to the surface.

During one session for a class on the Bill of Rights, Mr. Rhodes unexpectedly began addressing the class on gun rights and passing out cartoon pamphlets from a fringe organization called Jews for the Preservation of Firearms Ownership, said Scott Hershovitz, now a professor at the University of Michigan Law School, who was in that class.

Mr. Rhodes told classmates that he was not a member of the National Rifle Association because it was not aggressive enough in its defense of gun rights, and was “proud to share” how much more seriously the Jewish group took gun rights, Professor Hershovitz said.

“There were certainly other students who were supporters of the Second Amendment and believed that it protected an individual right to bear arms,” he said. “There was nobody who had constructed an identity around it in the way that Rhodes had.”

After graduation, some members of the class of 2004 ascended to the upper echelons of the legal world.

Mr. Rhodes took a different path. He clerked for an Arizona Supreme Court associate justice, Michael D. Ryan, a Vietnam War veteran, and then moved to Montana, where he practiced criminal law, touting in a classified ad “Ivy League quality … without Ivy League expense.” He was disbarred by the state in 2015 for violating the Montana Rules of Professional Conduct after practicing law in Arizona without a license in the state, and also failing to show up at hearings in Montana to address ethics complaints.

Many of Mr. Rhodes’s classmates have struggled to make sense of who he became. Mr. Seymour, the New York litigator, recalled receiving a notice from the Southern Poverty Law Center listing the Oath Keepers as an extremist group.

An image of Mr. Rhodes was shown on a screen during a House Select Committee investigation hearing on the Jan. 6 attacks, in July.Credit…Doug Mills/The New York Times

Still, even with the Oath Keepers, Mr. Rhodes made certain decisions — like not entering the Capitol himself on Jan. 6, or, according to Ms. Adams, often explaining “how conspiracy law worked” to other Oath Keepers — that suggested an understanding of the legal repercussions of his actions.

Even as Mr. Rhodes led an organization imbued with conspiracy theories of a world takeover by global elites, the stamp of Yale Law appears to have mattered to him. On early Oath Keepers blogs, he frequently noted his credentials, and made his prizewinning paper on enemy combatants available to readers.

In the days after Jan. 6, Mr. Rhodes composed a message to be sent to Mr. Trump, urging him to “save the Republic.”

Tags
From Said That Was Who

Was Naming a Special Counsel in the Trump Cases the Right Move?

How Parenting Today Is Different, and Harder